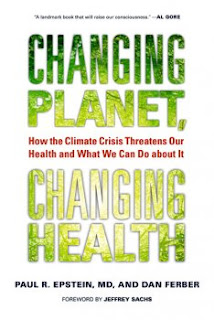 Global climate change is having profound effects on human health.

According to the Union of Concerned Scientists (UCS), by 2020 climate change-induced ground-level ozone, the primary component of smog, will cause millions of respiratory illnesses and thousands of hospitalizations for serious breathing problems, including asthma. The cost will be about $5.4 billion.

Changing Planet, Changing Health: How the Climate Crisis Threatens Our Health and What We Can Do about It, by Paul R. Epstein, M.D., and Dan Ferber (Berkeley: University of California Press, 2011), probes the topic of climate disruption’s effects on health in depth.

The respiratory problems that the UCS alluded to are only a small fraction of how climate change is harming human health, according to Changing Planet.

Epstein and Ferber state that the burning of fossil fuels and deforestation, which release CO2 and other greenhouse gases, are the root causes of both ozone pollution and climate change. Agribusiness is responsible for a quarter of U.S. greenhouse gas emissions, though the book doesn’t mention that.

“We’ve been pumping the waste of the industrial revolution, our greenhouse gases, into the atmosphere. In doing so we’re changing the climate, threatening ecosystems worldwide, and jeopardizing the health of untold millions,” the book claims.

The first part of Changing Planet details the first half of the subtitle, “How the Climate Crisis Threatens Our Health.” The authors use painstakingly reasoned arguments and lively case studies to illustrate their points. The book is in the first person, told from Epstein’s point of view, with a tone that’s both serious, conversational and personal, making the book easily accessible to the layperson.

The authors say we can expect “more extensive heat waves, reduced water quality, air pollution, food insecurity, and injuries and deaths from weather-related disasters” like the flooding, drought, heat and tornadoes we’ve seen in the United States in the last few months.

Extreme weather conditions foster infectious disease. For instance, recent research has demonstrated that because of climate disruption, the United States, and even more so, Canada, is witnessing an escalation of Lyme disease, carried by a type of tick. Computer models have predicted a “forward march” of Lyme disease, “already evident in New Hampshire and Maine.”

According to Epstein and Ferber, the rates of hayfever and such respiratory illnesses as asthma will rise. Ragweed, the pollen from which causes hay fever, “grows disproportionately faster than other plants under the high-CO2 conditions expected in the future.”

Food is another health issue that climate change influences. “If climate changes as scientists project,” ask the authors, “will we be able to grow enough food to feed humanity?”

More CO2 means altering the “power balance in favor of insects,” such as a beetle that destroys soy plants, and so can diminish crop yields. Because of shorter growing seasons, warming of the planet only 1.8°F “would decrease annual wheat, rice, and corn yields by 10 percent,” according to scientists’ projections.

Acidification and warming of the seas, both consequences of climate change, threaten “to impoverish and undernourish hundreds of millions of people.”

No wonder we see health effects from climate change: “Today’s atmospheric CO2 levels and temperatures are outside the limits that they’ve maintained for more than two million years.”

The book describes how the destruction of forests from insects and fires impacts human health and also delves into the health effects of storms, including Hurricane Katrina. It gives a comprehensive picture of the health effects of oil burning, nuclear energy and coal burning. The last causes pollution, habitat loss and human illness and death. “Coal may seem cheap, but the overall price we pay is huge,” the authors declare.

So far, so good. Epstein and Ferber present a comprehensive and convincing – though dismaying – account of the health effects of climate change. But when they get to the second part of the book, “What We Can Do About It,” their liberal, reformist politics, which allow them to think about effecting change only within the current socioeconomic system, weaken the book significantly.

"The authors say we can expect “more extensive heat waves, reduced water quality, air pollution, food insecurity, and injuries and deaths from weather-related disasters” like the flooding, drought, heat and tornadoes we’ve seen in the United States in the last few months."

For one thing, a colossal omission hurts the solutions part of the book: Epstein and Ferber neglect to consider the global warming impacts of the U.S. military, the world’s single largest polluter – “in particular, the military in its most ferocious and stepped-up mode – namely, the military at war,” according to Barry Sanders in The Green Zone: The Environmental Costs of Militarism.

When they write about the production of greenhouse gases, Epstein and Ferber fail to mention, in Sanders’s words, “The Pentagon is the largest single consumer of petroleum in the world. … The military also consumes one quarter of the world’s jet fuel.” The Pentagon uses 20 million gallons of petroleum each day and spew out a concomitant amount of greenhouse gases. “The military – that voracious vampire – produces enough greenhouse gases, by itself,” Sanders says, “to place the entire globe, with all its inhabitants large and small, in the most imminent danger of extinction.”

Second, the authors fall prey to the myth of individual solutions. Activities such as installing a more efficient heating and cooling system, riding a bike and buying local produce mitigate climate change imperceptibly as compared to the Pentagon’s activities.

Third, Epstein and Ferber fail to perceive that climate change and unrestrained free markets are inseparable. They quote The Stern Review, a report with lead author Sir Nicholas Stern, former chief economist at the World Bank: “The world does not need to choose between averting climate change and promoting growth and development.” That is a highly disputable idea.

As The Ecological Rift: Capitalism’s War on the Planet (by John Bellamy Foster, Brett Clark & Richard York) says, first, this idea assumes that the ecological “crisis can [and should] be managed by essentially the same social institutions [corporations] that brought it into being in the first place.”

The concept that climate change can be resolved within the capitalist system fails to take into account that that system is based on endless growth, which necessitates the perpetual, escalating exploitation of the earth.

“Even the boldest establishment economic attempts to address climate change fall far short of what is required to protect the earth – since the ‘bottom line’ that constrains all such plans under capitalism is the necessity of continued, rapid growth in production and profits,” says the Ecological Rift. In other words, capitalism’s “war” on the planet demands that we “develop an economic system that is not based on endless accumulation but rather on providing for the needs of people while protecting ecosystems.”

Epstein and Ferber, meanwhile, search for solutions that reform the current system.

"For hundreds of years, our global economy has been driven by endless growth and consumption. But in a world with finite resources and a limited ability to recycle waste, endless consumption is not possible."
They do acknowledge the flaws of capitalism. “The financial order of the post-Bretton Woods era has enshrined rigid free-market ideals and has hewn to corporate profit, cheap goods, and cheap labor as guiding principles. It has done a much poorer job at serving the health of populations and the health of nations.”

They also recognize that “the government-enforced laissez faire system known as the Washington Consensus … steered the global economy off a cliff, damaged the environment, worsened climate change, and harmed human health.”

What’s more, they’re insightful about the fact that oil companies, oil-field services (such as Halliburton), coal companies and “energy-intensive industries such as cement, steel, and petrochemicals have billions of dollars at stake in maintaining the status quo.”

Further, they point out, “For hundreds of years, our global economy has been driven by endless growth and consumption. But in a world with finite resources and a limited ability to recycle waste, endless consumption is not possible.”

Thus, Changing Planet, despite its insight into how the system functions, recommends patching up capitalism as opposed to changing the system. As solutions to climate change the book recommends reformist efforts, including regulation of world trade and taxing of currency transactions. Though Epstein and Ferber assert that distributing global wealth more equitably is key to heading off the health effects of global climate change, their politics prevent them from taking the next step, calling for a society that differs fundamentally from capitalism.


The first part of Changing Planet, Changing Health does an excellent job of accomplishing what it attempts to, illuminating the many ways climate change is calamitous for health. That part of the book will be very useful to activists.

Changing Planet, Changing Health ends on an upbeat note. Later generations, the authors hope, will be able to say that our era was one in which “our society began acting on its long-thwarted instinct to care for the creatures with whom we share the planet, to care about future generations, to revere human life. If so, we’d veer from our tarnished history, creating a legacy of healing for both the Earth and ourselves.”

Linda Greene can be reached at lgreene@bloomington.in.us.
Posted by Next Year Country