International Stop the Tar Sands Day: A guide to the disaster 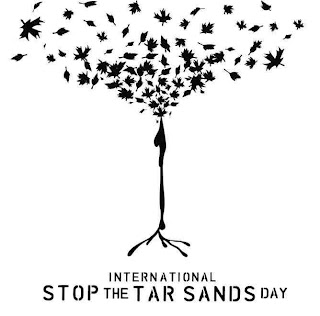 For many Canadians, the image of the oil sands as a boost to the economy, providing a bounty of jobs and ensuring a continuing supply of fossil fuel, overshadows anything they may hear about its environmental and human impacts.

This image is perpetuated by the Alberta and Canadian governments and by most of the oil sands industry, who downplay the repercussions of oil sands production and promise that "clean-up" of this massive project is imminent. Increasing greenhouse gas emissions, resource depletion, environmental devastation, and threats to the existence of First Nations peoples commonly go unheeded by many Canadians -- either because believing in the promises of fixes is the most comfortable route or because they are not aware of the "full story." Many people don't fully comprehend the extent of the repercussions of oil sands development nor the limitations of proposed "fixes" or the lack of remedial action.

In producing A Comprehensive Guide to the Alberta Oil Sands: Understanding the Environmental and Human Impacts, Export Implications, and Political, Economic, and Industry Influences, I have endeavoured to provide the "full story." The report brings together information from many sources to provide a single, easily readable resource on a broad range of issues related to oil sands production and development, and addresses several misconceptions.

One example is greenhouse gas (GHG) emissions. The report provides a detailed accounting of production related GHG emissions. The National Inventory Report (NIR) figure for oil sands emissions for 2008 (the latest available at the time of writing) is often loosely misinterpreted by governments, the media, and the public as representing the total emissions related to oil sands production. Through calculated, averaged estimates the report shows that when all well-to-pump emissions are taken into account they are close to double the widely referenced NIR figure.

Another example of misconception is the image of bountiful, high-paying jobs. For many people involved, these jobs don't form an ideal image. The lives of mobile workers, away from their families for long stretches of time, the majority of them living in work camps, is far from ideal, and many suffer from vulnerability and stress.

Temporary Foreign Workers, who are brought in to fill Canadian labour shortages (60,000 in Alberta in 2010), often experience exploitation, abuse, racial discrimination, and lack of rights. As well, high living costs consume much of the income from high paying jobs. Even community members employed in jobs outside the oil sands are finding the "boomtown" growth of Fort McMurray a strain.

Another example is the greenwashing on reducing GHG emissions from the oil sands by utilizing carbon capture and storage (CCS), the source of most of Canada's "green" spending. Both the Alberta and federal governments know from their own studies that there are vast technological differences between CCS for coal and CCS for oil sands, the latter being so much more complex because of the number and diversity of emission sources and locations, and because their CO2, streams tend to be relatively small and diluted.
Advertising

And, even for coal-fired plants, CCS is yet unproved, expensive, and energy and water intensive. There are additional concerns about the safety, capacity, and liability of storing carbon dioxide underground, and the expediency and extent of contributions that CCS can actually make to cutting global CO2, emissions. CCS has evolved into a justification and diversion for prolonging dependence on fossil fuels, assuaging public fears about resulting CO2, emissions and delaying efforts to aggressively convert to more cost-effective, renewable, low-energy systems.

CCS also won't prevent the increased risk of an oil spill fouling coastal areas of British Columbia if current proposals for increased tanker traffic carrying oil sands crude are approved. And it won't alter the risk of one of the large oil sands tailings ponds, held in check by barrage dams up to 100 metres high, breaching. Catastrophic amounts of toxic waste would flow into the Athabasca River, make their way into the Great Slave Lake and the Mackenzie River, and enter the Beaufort Sea.

The oil sands lie beneath 140,200 square kilometers of northern Alberta forest. So far, approximately 60 per cent of this land has been leased out to companies for extraction. Of this, it is a relatively small portion, 686 sq. km., that has been disturbed by oil sands mining and has already resulted in extensive environmental devastation. The prospect of the potential magnitude of future development will exponentially reap disastrous and irreversible levels of environmental destruction.

The report concludes, "Canadian governments and the Oil Sands industry argue in favour of further Oil Sands development, saying that on a global basis the GHG emissions and the environmental destruction of the Alberta Oil Sands are small. However, what this development represents is huge. The Alberta Oil Sands are impeding the enforcement of adequate environmental policies and emissions reduction within Canada and adversely influencing Canada's role in global climate change initiatives. They are also setting the stage for further extraction and processing of unconventional fossil fuels on a worldwide scale, which would lead to substantive increases in global GHG emissions from fossil fuels. The potential for increased exploitation of unconventional fuels is also providing a means for global governments and industry to perpetuate the heavy use of fossil fuels rather than seriously tackling the necessary conversion to renewable energy, low carbon transportation and energy supplies, and reductions in energy use.

"Given the projected repercussions of climate change based on current emissions reduction commitments, only short-term thinking and maintaining local pollution, global warming, and loss of habitat as 'externalities' allow the ever-expanding Oil Sands project to continue."

The full report can be downloaded HERE.

Michelle Mech is a writer and freelance journalist living on Salt Spring Island, British Columbia.
Posted by Next Year Country