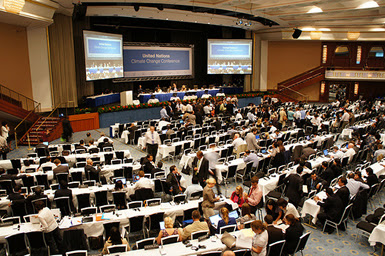 BONN – At the close of UN climate talks in Bonn that failed to address the huge shortfall in emission targets compared to what the science suggests is necessary, Ambassador Pablo Solon of the Plurinational State of Bolivia called for a high-level meeting to discuss how to drastically reduce climate pollution.

“In order to have success at the UN climate conference in Durban in December we need to have a clearer willingness to increase the emissions reduction pledges that are on the table.” Ambassador Solon said.

“We have seen in these two weeks not much engagement in science but a lot of engagement in business. There has been no movement on the big issue of reducing emissions but instead a proliferation of proposals on new market mechanisms.” Ambassador Solon said.

“All the reports show a problem of science and a problem of leadership. We need deep cuts and we need developed countries to take the lead That is why we propose an ad-hoc high level meeting dedicated to the issue of increasing targets.” Ambassador Solon said.

Reflecting on the two weeks of talks the Ambassador outlined concerns regarding the future of the Kyoto Protocol, with new market proposals, and hope for consideration of the rights of nature.

“The lack of ambition for Kyoto Protocol worries us very much. Countries are abandoning the international rule based system. Some developed countries are proposing effort for the second period that is even less per year than they are doing now.” Ambassador Solon said.

“We have seen proposals for markets for the oceans, so called ‘blue carbon’ we are surprised and concerned by these. The problem with the reference level for markets such as these is that it is based on assumptions that are not real. And there is the great possibility that the new market mechanisms will just create more hot air.” Ambassador Solon said.

“With parameters that are not real countries try to get a bigger share of certificates of reductions and in that way instead of developing new sources of finance we will develop new sources of deterioration of our natural systems.” Ambassador Solon said.

“Many of the proposals that we have had advanced have had interesting discussions such as the issue of the rights of nature an the integiry of ecosystems. This is key for us because we are all part of a system and until now we have not recognized the limits to our exploitation of natural resources that will affect precisely that system.” Ambassador Solon said.
Posted by Next Year Country