Historian Erik Conway did two things this week that might seem counterintuitive, if not downright odd.
He voluntarily left the warmth of Pasadena, Calif., where he works at NASA's Jet Propulsion Laboratory, to come to Edmonton during the middle of a bitter cold snap. And while here, as thousands of Edmontonians coaxed their cars to life for the frigid commute home through snow-choked roads, Conway entered a lecture hall at the University of Alberta to present a lecture on global warming.

Conway understands, as do climate scientists around the world, that a cold snap in Edmonton does not negate the science of global warming that takes into account the worldwide climate over a span of a century and a half.

But he also understand how it's simple human nature for each of us to focus on the evidence under our noses -- and in Edmonton on Thursday that evidence included frozen cars, ice scrapers and frost nip. Just thinking of global warming seemed counterintuitive.

For people with a shaky notion of climate change, frigid days like this probably raise doubt. That doubt is exploited by those who deny the science of climate change, (people such as U.S. Senator Jim Inhofe whose family built an igloo during the blizzard in Washington, D.C., last year and sarcastically labelled it "Al Gore's New Home").

But there's another kind of doubt that doesn't rely on the vagaries of Mother Nature. It is manufactured by man, specifically by a small group of influential libertarians in the U.S. who have led a decades-long ideological fight, first against the communists and then the health community and now environmentalism. 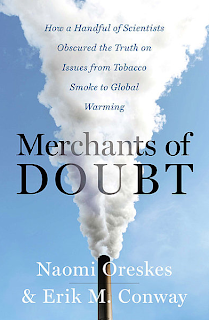 Their story is spelled out in a book that Conway has written with coauthor and fellow historian, Naomi Oreskes: Merchants of Doubt: How a Handful of Scientists Obscured the Truth on Issues from Tobacco Smoke to Global Warming.

It is a fascinating story -- meticulously researched and engagingly presented -- detailing a concerted attack on science by a small group of ideologically driven scientists, among them Frederick Seitz who helped build the first atomic bomb and Fred Singer who was a chief scientist in the Ronald Reagan administration.

"Both were extremely hawkish," says Conway, "having believed passionately in the gravity of the Soviet threat and the need to defend the United States from it with high-tech weaponry" -- namely Reagan's (failed) Strategic Defence Initiative (SDI -- dubbed "Star Wars" by the media). To counter the growing number of critics (including prominent scientists such as Carl Sagan), proponents of SDI founded an institute -- the George. C. Marshall Institute -- with Seitz as chairman to promote "science for better public policy." Its real aim was to promote SDI by spreading fear about the Soviet Union (which at the time was actually falling apart).

Founding a institute with an impressive title to refute scientific evidence -- with unscientific propaganda -- has become a common technique among proponents of a cause. Cigarette makers formed the Tobacco Industry Research Committee to disseminate misinformation and give the impression among the public there was a scientific debate about whether cigarettes actually cause cancer. As one tobacco executive wrote in 1969: "Doubt is our product since it is the best means of competing with the 'body of fact' that exists in the mind of the general public. It is also the means of establishing a controversy."

The tobacco industry back then, like the climate-change-denial industry today, needn't prove respected scientific data wrong; they merely have to raise doubts.

"In case after case," write Conway and Oreskes, "Fred Singer, Fred Seitz and a handful of other scientists joined forces with think tanks and private corporations to challenge scientific evidence on a host of contemporary issues. In the early years, much of the money for this effort came from the tobacco industry; in later years, it came from foundations, think tanks, and the fossil fuel industry. They claimed the link between smoking and cancer remained unproven. They insisted that scientists were mistaken about the risks and limitations of SDI. They argued that acid rain was caused by volcanoes, and so was the ozone hole. They charged that the Environmental Protection Agency had rigged the science surrounding second-hand smoke. Most recently -- over the course of nearly two decades and against the face of mounting evidence -- they dismissed the reality of global warming. ... In case after case, they steadfastly denied the existence of scientific agreement, even though they, themselves, were pretty much the only ones who disagreed."

Their motivation, says Conway, was a devotion to "market fundamentalism," a dogmatic belief that the free market can solve all social and policy problems.

Fred Singer argued if people allowed government to regulate second hand-smoke "there is essentially no limit to how much government can ultimately control our lives." For Singer and his colleagues, free markets were as valuable as free speech and free religion.

When communism collapsed these libertarians found a new threat: environmentalism. To them, socialism and environmentalism equalled the same threat: government intervention. To admit that human induced climate change is real means you should probably do something about it. That means more government regulation and international treaties.

They have fought restraints on everything from smoking to smokestack emissions. They are staging their most successful fight yet on climate change.

"The debate over climate should be about policy, it should not be about the science or it shouldn't have been about science for about the last 15 years," says Conway. "Whether or not to do anything about an environmental problem is really a question of ethics. It's a question of, especially when you're talking about a long-term problem like climate change, it's a question of what kind of a world should we be leaving to our children and grandchildren?"

But we continue to be caught up in a debate over science, not policy. That's the fault of the "doubt-mongers" but it's also because, unlike acid rain and a depleted ozone layer, finding a solution to climate change is proving difficult. Weaning ourselves off fossil fuels will take time and money. And a monumental effort.

Who wants to do that if there's some doubt? Or a persistent whispering in your ear from climate-change denial "experts" with a hidden agenda. Thanks to Merchants of Doubt, though, that agenda is no longer hidden.

See also: A Merchant of Doubt attacks Merchants of Doubt
Posted by Next Year Country