Why we need to make peace with nature 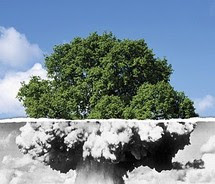 If you believed all the ads flaunting “green products” you’d think we were almost on a sustainable path. You might even think that consuming more “green products” is good for the environment, which some of the ads imply. Of course it’s better to buy a car that gets better mileage. But a vehicle that produces one-half the carbon of an older model still produces carbon. Twice the car sales globally and we’d back on the same track.

The green products ethic can be a start, especially if it pushes us towards low-carbon technology, like renewable-energy powered planes, trains, buses and cars. But this shouldn’t be confused with a sustainability ethic, which involves much more. Our collective mind-set has to change for us to want to get on a sustainable track; in particular we need to alter how we see ourselves in nature. Sustainability ultimately requires that we make peace with nature.

This may sound slightly “biblical”. Some fundamentalists of various religions think of their God as being punitive; but it is deceptive to think of natural systems in this way. Nature isn’t revengeful, though it definitely responds to our ignorance and neglect. And awakening to this mutual process is a spiritual as well as a social and economic imperative. What kind of religion justifies sacrificing creation for the short-term economic gain of the few?

How can you look at what Alberta’s tar sands are doing to the land, water and air and not see an assault on nature? Alberta’s government has subsidized and encouraged the rapid pace of tar-sand “development”. But it won’t admit that there’s probably a relationship between the forest fire that enveloped the community of Slave Lake and the increasing carbon going into the atmosphere from such mega-projects.

Was it simply a freak of nature that five hundred homes and businesses were destroyed as 7,000 Slave Lake residents fled the fire? Or was this the natural outcome of the continuing climate change trend towards drier forests and more and larger fires? As is happening across Canada, forest fires in Alberta have been increasing since the 1970s; doubling to 1,811 by 2010. Already this year there has been 471 fires, but, most important, these have already burned 264,000 hectares or three-rimes the 2010 total. According to Professor Mike Flannigan of the University of Alberta, interviewed in the May 21, 2011 Globe and Mail, this is “…consistent with what we expect from climate change.” Fighting Canada’s forest fires has risen to cost nearly one billion dollars a year.

And what about the extreme spring run-off flooding that’s hit cottage country along the Qu’Appelle lakes, and put even more farm-land under water in Manitoba’s Red River Valley? What about extreme flooding along the Richelieu River in Quebec? Should we also be connecting the dots between the higher frequency of flooding here and abroad and climate change? After all, the rising temperature of the atmosphere enables it to hold more moisture. And more of this moisture is falling in the southern areas of Canada. Far less moisture is getting further north to the boreal forest which is drying and more prone to fire.

Prairie flooding and forest droughts seem counter-intuitive; but it’s the extreme weather scenario predicted by climate change science. And what of the much more powerful and deadly tornadoes, such as recently in Missouri! Shouldn’t we also be connecting these to climate change?

We’d better! We are acting a bit like the frog swimming nonchalantly in a slowly heating pot of water. Unable to establish a baseline and take action to avert the approaching catastrophe, the frog boils to death. We may not be much smarter than the frog because our bigger brain seems to just get filled with more illusions e.g. about our separation from and ability to exploit nature. Many Canadians let the federal election go by without demanding any fundamental discussion of extreme weather, even though unprecedented flooding was occurring across southern Canada. Harper won a majority government by appealing to many of our illusions about security. The insurance industry sees the climate change trend; how is it that we still let our politicians off the hook?

There is something very, very wrong going on here. It will be our children who will face the biggest burdens from a lack of action on climate change. Yet they had no real say in the election outcome. And most voters wanted progressive change. By voting Conservative less than 3 of 10 eligible voters wanted to keep Harper’s status quo, which was erroneously equated with personal security? But what kind of personal or family security can there be in a world where flooding, droughts and storms increase?

Food security and access to safe drinking water will decrease in such a status quo world. Those who grow food for market or who garden have already noticed changes on a local or regional level. Due to extreme moisture last summer, like a lot of gardeners we lost all of our greenhouse tomatoes due to blight and slugs. It’s the first year, ever, for this. This spring is the first ever where our garden wasn’t completely in by the May long weekend, but the soil is still too wet and cold to plant. Imagine this on a larger scale. Imagine trying to eke out a living in Pakistan, where one-third of the country remains under water from flooding. Imagine northern Japan now facing flooding after enduring the earthquake, tsunami and nuclear disaster.

Energy, water, food and health are all inter-connected in ecological science and in our experience, if we’ll take time to look. The unsustainable fossil-fuel based economy and governments that subsidize this are fueling counter-productive, potentially dangerous trends. We have the knowledge and knowhow to begin to reverse this, but it seems we have to want to make peace with nature to proceed. Until we realize the traditional industrial economy is waging a sort of undeclared war on nature, which will bring blowback on our children’s children, we’ll remain like the frog in the pot. But we can always buy more “green products” as we tread in the water coming to a boil.
Posted by Next Year Country