There's no room for a climate of denial 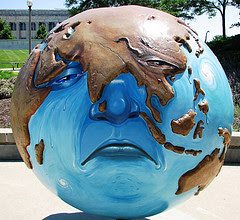 This opinion piece was published in The Canberra Times by Dr Haydn Washington, co-author of Climate Change Denial, published by Earthscan.
Denial is as old as humanity but is not the same as scepticism. The Oxford English Dictionary defines a sceptic as ''A seeker after truth; an inquirer who has not yet arrived at definite conclusions''. We should thus all seek the truth. Genuine scepticism in science is one of the ways science progresses.

Denial is very different; it is a refusal to believe something, no matter what the evidence. Climate change deniers often call themselves ''sceptics''. However, refusing to accept the overwhelming scientific evidence is not scepticism but denial.

Paradoxically, as scientific evidence for human-caused climate change pours in, interest and belief in climate change within the public is on the decline. In Norway, the percentage of people who were worried dropped from 40 per cent in 1989 to less than 10 per cent in 2001. In Australia in 2009 the Lowy Institute reported that 56 per cent of those surveyed thought climate change was very important. However, this was down 19 per cent from 2007. How can this be?

One can divide psychological denial into three categories: literal (the denial industry, often funded by fossil fuel companies); interpretive (e.g. government spin or describing a massacre of civilians as ''collateral damage''); and implicatory (denial ''we the people'' engage in). Implicatory denial is not denying the facts about climate change per se, but denies the implications and is a failure to transform your belief into action. People accept information about human-caused climate change as true, yet choose to ignore it. We can thus let denial prosper within ourselves, through a sort of self-interested sloth.

There are various types of denial arguments. One useful classification breaks them down into ''conspiracy theories'', ''fake experts'', ''impossible expectations'', ''misrepresentations'' and ''cherry picking''. Space precludes covering all the denial arguments about climate change in detail (there are 160 of them!) though you can find the full list at my co-author's website.

Commonly, deniers cherry pick what evidence they present. One key example is ''global warming stopped in 1998'', picking one particular data source which showed a temporary levelling in air temperatures. It ignored other studies that show temperature is still increasing, and that most of the warming goes into the oceans. Global warming has not in fact gone away.

Another common denial argument is that ''climate has always changed in the past''. For the past 8000 years we have been in a stable climate. Society has never lived through the degree of climate change we are now causing. Bushfires can also be natural yet we don't dismiss the existence of arson. What most deniers conveniently overlook is that Australia is a nation at great risk from climate change. We are the driest inhabited continent in the world. Doing nothing about climate change will end up costing us far more than taking action such as instituting a carbon price.

Why do we let denial prosper? Many things are involved, including fear of change, failure in values, the belief in endless growth, ignorance of ecosystem services, and also the media itself. Researchers note the ''balance as bias'' within the media, where a denier is given equal prominence with all climate scientists. Thus the public could be forgiven for thinking the science is in doubt when it is not, as every academy of science in the world has concluded. The media thus gives deniers prominence as it loves a controversy. It is actually even worse than this, for it is common in Australia for the media to fail to give equal time to scientists.

How do we roll back climate change denial? ''Accept reality!'' is an obvious response. Climate change denial has succeeded because we as a society let it prosper. We let ourselves be deluded by the siren song of denial. When we worry about something, if it makes us afraid, if it clashes with our self-image, then we can move into denial.

However, when denial threatens society and the Earth's ecosystems, it has become not only a delusion, but a dangerous pathology. If we abandon denial, we can both solve climate change and make the world a better place. That, nobody should deny.