The Rights of Nature - Purhase Now

The Case for a Universal Declaration of the Rights of Mother Earth
Now for Purchase HERE. 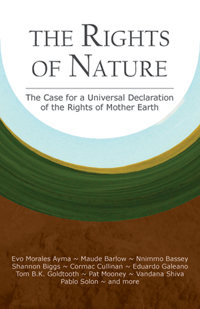 In April 2010, Bolivia hosted a gathering for civil society in the wake of the failed December 2009 United Nations Copenhagen climate summit (COP 15). It was clear to millions of climate activists, scientists and environmentalists around the world that the UN process had been sidelined by a deal, the Copenhagen Accord, which represented a major step backward in the search by the UN for a binding, comprehensive agreement that would protect humanity and the Earth from the ravages of climate chaos.

When more than 32,000 participants from around the world gathered for the World People’s Conference on Climate Change and the Rights of Mother Earth in Cochabamba, Bolivia, it was evident that a counter message had to be sent to the UN and the world that a far stronger commitment was needed if humanity is to successfully move to a safe and sustainable future.

Out of this World People’s Conference came a call to protect nature differently by recognizing the Rights of Nature, or as expressed by others, the Rights of Mother Earth. The UN General Assembly proclaimed April 22, 2010, Mother Earth Day, and the Declaration was introduced to the G-77 countries and UN Secretary General Ban Ki-moon several weeks later. It is the intention and hope of the drafters and supporters that this groundbreaking Declaration will take its place alongside the Universal Declaration of Human Rights as a guide for the future of humanity.

This book brings together the voices of acclaimed authors, progressive thinkers, political leaders and environmental and community activists from around the world who share their passion and insights about the Declaration, the Rights of Nature and the urgent need to recognize the unbreakable link between respecting ourselves and respecting the planet – Mother Earth – on which we all live and depend. The authors all reflect on the important question: What would our world look like if nature had rights?

With distinguished contributors such as Maude Barlow, David Suzuki, Margaret Atwood, Eduardo Galeano, Nnimmo Bassey, Pat Mooney, Shekhar Kapur, Susan George, Dr. Vandana Shiva and Archbishop Emeritus Desmond Tutu and more, The Rights of Nature: The Case for a Universal Declaration of the Rights of Mother Earth in meant to inform and inspire others about the need to create and ratify a binding instrument to protect the rights of the Earth and all living things upon it.

This new way forward would inspire a new model of governance that places the Rights of Nature – the Rights of Mother Earth – at the heart of existence, recognizing that there is no such thing as a human right unless the natural world is protected now, and for all time.

The Rights of Nature: The Case for a Universal Declaration of the Rights of Mother Earth is published jointly by The Council of Canadians, Fundación Pachamama and Global Exchange (2011).
Posted by Next Year Country