Climate change impacts across Canada are become more apparent all the time. Studies are emerging warning us of imminent threats to our safety and well-being. It has become clear that many regions across Canada need to be better prepared to deal with these impacts; from sea level rise on our coasts, floods in central Canada, and water shortages in the west. 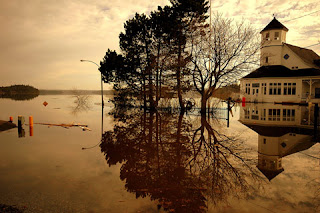 A report released this May, 2011, by the Arctic Monitoring and Assessment Program (AMAP), an international research organization, says that global warming will cause sea levels to rise as much a 1.60 meters by the year 2100.

"The consequences for communities along our eastern coast of a 1.6 m rise in sea level are grave," says Raphael Shay, Climate and Energy Coordinator at Conservation Council of New Brunswick (CCNB) Action. "Government must place a top priority on drafting a new climate action plan to continue on the successes of the current plan, which ends next year," he said.

In 2006, a study by Environment Canada found a 100 centimetre sea-level rise would flood $118 million worth of properties in Shediac Bay, NB alone. The study warned that swelling sea levels will intensify storms and flooding throughout Atlantic Canada. In addition it revealed that investing in early adaptation strategies in Kent County could increase employment by 8-18% compared to significant job losses of 25-30% that would occur in the tourism sector if no action is taken to guard against sea-level rise.

"The village of Le Goulet is already planning to erect costly coastal barriers and parts of the Tantramar region are being flooded to protect themselves from sea-level rise," said Raphael Shay. "We need a comprehensive Climate Action Plan that contains a road map that will take us to 2020, laying out the essential measures needed to cut our emissions and establish new infrastructure immune from coastal flooding," he said.

The rural council of Beaubassin East has passed the province's first bylaw requiring new construction in coastal areas to be at least 4.3 metres above sea level. Mount Allison University, in Sackville, NB, released a study that found the area's dikes and sluice gates, require more investment to be ready for rising seas.

Shrinking snowpack in the Rockies raises concerns of water shortages 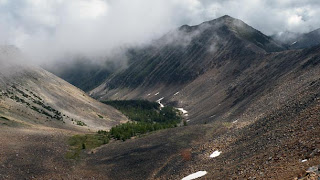 More than 70 million people depend on water from rivers fed by melting snowpack in the Rockies. But over that last 50 years the snowpack has shrunk more quickly than in the past 800 years.

This new study is from Brian Luckman, a geography professor at the University of Western Ontario in London.

"What we think is going on is spring temperatures are warming up. Spring is coming sooner, so those big April-May dumps of snow which top up the snowpack at the end of the season are now rain," said Dr. Luckman. The study also shows that temperature has recently overtaken the amount of precipitation as the biggest influence on the snowpack.

Gradual decline in stream flows are already happening in some of Canada’s most important watercourses. 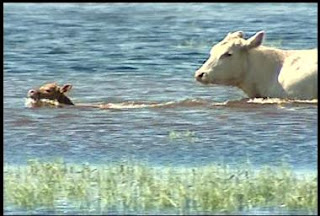 Four years of flooded pastures has left 40 percent of Manitoba cropland, or 4 million acres, unplanted this year - breaking the record for lost acreage due to spring flooding.

The province has called for a study on how to deal with "excess moisture on agricultural lands" in the area the region. This study is hoped to point to effective adaptation measure for the future.

Tony Szumigalski, a policy analyst with Manitoba Agriculture, said climate change appears to be causing greater extremes on the Prairies, from drought in Alberta to chronic flooding in Manitoba. "The Interlake has been under water for the last three or four years," he said. "It's been very difficult, especially for a lot of the livestock producers. Their hay fields have been flooded out so there have been issues getting enough hay. There have also been issues related to crops as well."

"It's a sad situation up here," said Dave Shott, who has been farming around Arborg, MB, for 22 years. "We have nothing. The atmosphere out here is total despair." Studies are all well and good, Shott said. But given most farmers are in their fifth year of ruined crops and flooded fields, it's about four years too late, he said.

Mitigating climate change by dramatically reducing greenhouse gases is the ideal solution, but the Harper government has not taken the issue seriously. it is now clear that with these growing impacts an adaptation strategy is also needed. Not just emergency response plans, but a real strategy to avoid regional catastrophies.
Posted by Next Year Country