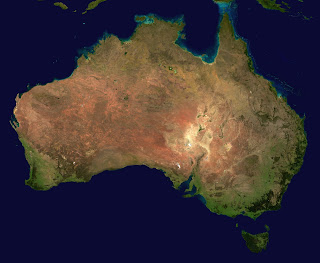 When you fly over the earth’s oldest land mass, Australia, the view can be shocking.

Scars as long as European countries are the result of erosion. Salt pans shimmer where once native vegetation grew. This is almost impossible to reverse. The first to die are the most vulnerable species.

According to the International Union for the Conservation of Nature, Australia’s devastation of its natural environment has caused more mammal extinction than in any other country. The iconic koala is used to attract tourists; the Queen and Oprah Winfrey, are photographed cuddling one, unaware that thus unique creature has enriched the state of Queensland for decades with its industrial slaughter and the sale of its skin to Britain and America.

Today, the belatedly “protected” koala is not threatened by flood or drought but rapacious land-clearing, of which Queensland is the national champion. Each year, according to the World Wildlife Fund for Nature, the state effectively destroys 100 million birds, mammals and reptiles.

The land is “cleared” by fire or machinery, often with a heavy chain tied between two bulldozers: a technique developed by Queensland’s most notorious land-clearer, the late Sir Johannes Bjelke-Petersen, the conservative state premier for 19 years, whose self-awarded knighthood was given for “services to parliamentary democracy”, such as winning gerry-mandered elections with 20 per cent of the votes.

In 1992, a defamation jury found that Bjelke-Petersen had been bribed “on a large scale and on many occasions”. Two of his ministers and his police commissioner were jailed for corruption. Lucrative land became a prize for cronies known as the “white shoe brigade”. Brown envelopes of cash were handed over at a five-star hotel recently lapped by floodwaters in the centre of Brisbane.

Last July, the Queensland Labor government sold swathes of the state’s forests and plantations to Hancock Queensland Plantations, a subsidiary of a US-based timber multinational. Queensland has many low-lying flood plains on which developers have been allowed to make fortunes selling plots.

The victims of the great flood have been mostly poor people, including timber workers and their families. Most could not afford insurance or discovered their policy did not include “types of flood”.

The Australian Competition and Consumer Commission, says an ACCC report, deliberately stopped insurance companies from agreeing a common definition of flood so that “insurers will continue to compete vigorously by product differentiation” by using many definitions of “flood” to specify which risks are covered and which are excluded”.

The callousness of this imposed confusion is emblematic of how the Australian elite has treated those ruined by an inland ocean the size of Germany and France combined.

Flooding also struck in Brazil and Sri Lanka in December, but the disaster in Australia is far more revealing; for Australia is a “first world” country with advanced technology and communications; and yet tens of thousands of people received no emergency warning.

Since the 1980s, Australia has become the model of a social democracy where the cult of the “market” has diminished public services and infrastructure budgets and divided by wealth a society that once boasted the most equitable spread of personal income in the world.

Little of this is discussed in a media of which Rupert Murdoch owns 70% of the capital city press. When the leader of the Greens, Bob Brown, dared suggest that the Queensland flood was due in part to “the burning of fossil fuels [causing] the hottest oceans we’ve ever seen off Australia”, he was abused as “insensitive “ and told to apologise to the mining industry.

In the decade to 2005, says the Wilderness Society, “the amount of land clearing in Australia was so extensive that the greenhouse gases produced rivaled the amount produced by cars and trucks”.

A feature of the floods has been the PR campaigns of leading right-wing Labor Party politicians, notably prime minister Julia Gillard and Queensland premier Anna Bligh, who have talked up the “Aussie battler” spirit in the face of “Mother Nature’s wrath”. The media’s relentless echo of this evokes Sir Johannes’s description of spinning journalists as “feeding the chooks”.

In truth, successive governments have rejected, ignored or suppressed the recommendations of their own experts that, if acted upon, could have saved Brisbane.

In 1999, a report commissioned by Brisbane City Council warned of “significantly higher” flooding than in the last great flood in 1974. When the contents were leaked, an alleged cover-up was referred to the Crime and Misconduct Commission, and nothing happened. “Don’t you worry about that,” Sir Johannes used to say.

Professor Andrew Short, director of the Coastal Studies Unit at Sydney University, compares the Queensland flood with the scandal of New Orleans following Hurricane Katrina. “This is something we have been waiting for,” he wrote “…. Why were there no levees to protect the low-lying towns? … why are major highways and railways still below flood level?”

Prime Minister Gillard has so far offered crumbs from a treasury in surplus, which subsidises the fossil fuel industry with $9 billion and is currently spending $1.1 million on Australia’s mercenary “commitment” to American wars in Afghanistan and elsewhere.

Having sent just 13 helicopters to rescue the stranded, Gillard appointed Major-General Mick Slater to head the recovery operation: an admission that the civilian emergency services had been so depleted, they could not cope. Slater ran Australia’s colonial adventure in East Timor. His most interesting statement has been a threat.

“There is no reason why we won’t have [success],” he said, “unless … the media start to become divisive within the community and then, if there are areas of failure, I think I could find the reason and track it back to areas of the media.”

He was not challenged. The chooks were fed.
Posted by Next Year Country