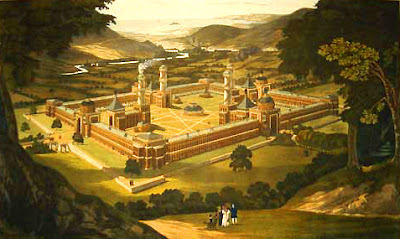 As it is known, the word utopia comes from Thomas More’s book Utopia (1500) - from the greek u-topos, “nowhere” - describing an imaginary island where human beings live within a harmonious society. The sociologist Karl Mannhein has given his “classic” - and still today the most pertinent - formulation of utopia: All the representations, aspiration or images of desire that move towards a rupture of the established order and exerce a “subversive function”.

The topology given by Mannheim permits to avoid certain conceptions that are too narrow or too vague and that make utopia an unrealistic or unrealizable dream: How are we to know in advance which aspirations will or not be “realizable” in the future? Was the abolition of slavery considered “realistic” in the 17th century? Did not democracy appear “unrealizable” in the middle of 18th century?

With Ernst Bloch utopia is displaced from spatial imagination to temporal movement. For the philosopher of hope, utopia is first of all a waken dream oriented towards the future, a landscape of desire. The objet of the dream and of the desire is a non-yet-being which exists in reality as latency. In other terms, utopia is the anticipation of a world not-yet-become, but strongly desired. Thanks to Marxism, we move away from purely imaginary and still abstract utopias and towards a concrete utopia, rooted within the contradictions of reality.

Ecosocialism is a utopia in this sense, one that is founded on the conviction that “another world is possible”, another world that exists nowhere, or not yet. What is then ecosocialism? It is an ecological current of thought and action that re-appropriates the fundamental achievements of socialism - while freeing it from its productivist scoria. For the ecosocialists, the logic of the market and of profit - as well as that of the bureaucratic authoritarianism of the “real socialism” - are incompatible with the exigencies of preserving the ecological balances. The planetary ecological crisis has attained a decisive point with the phenomenon of climatic change, provoked as it is known, by green house gases emitted by the combustion of fossil based energies (carbon, petroleum). Less than two years ago, the International Ecocosialist Network published a manifesto on climatic change, in the event of the World Social Forum of Belem do Para, Brazil (January 2009). This document declared:

“A global warming left without control will have devastating effects on humanity, the fauna and the flora. The yields of the harvest will fall drastically, bringing about famine on a large scale. Hundreds of millions of people will be de-placed by drought in some regions and by the rise of ocean level in others. A chaotic and unpredictable temperature will become the norm.”

One needs only to read the newspapers today to understand that this phrase must be corrected and the verbs put in the present tense. Who is responsible for this situation unseen to date in the history of humanity? The fault befalls on the capitalist system, on its absurd and irrational logic of infinite expansion and accumulation, its productivity obsessed by the search for profit. Ecosocialist utopia is constituted as a radical response to the destructive dynamic of the capital. This current is far from being politically homogenous, but most of its representatives agree on certain common themes. In rupture with the productivist ideology of progress - in its capitalist and/or bureaucratic form - and opposed to the infinite expansion of a mode of production and consumption destructive of nature, it represents an original tentative to articulate the fundamental ideas of marxism with the achievements of ecological criticism.

James O’Connor defines as ecosocialist, the theories and movements that aspire to subordinate the exchange value to the use value, in organizing the production accordance to social needs and the exigencies of the protection of the environment. Their goal, an ecological socialism, would be an ecologically rational society founded on democratic control, social equality, and the predominance of the use value. I would add that: a) such a society supposes the collective property of means of production, a democratic planning that allows the society to define the goals of the production and the investments, and a new technological structure of productive forces; b) ecosocialism would be a system not only based on the satisfaction of human needs democratically determined but also on the collective rational exploitation of Earth’s resources, while respecting the ecosystems.

Ecosocialism develops thus a critique of the argument of the “neutrality” of the productive forces, that has been predominate among the leftists of the 20th century, in its two version, social-democrat and soviet communist. This critique could benefit, in my opinion, form Marx’s remarks on the Commune of Paris: the workers cannot take over the capitalist State and put it to their own services. They must “break” it and replace it by another, of nature completely distinct, a non-governmental and democratic form of political power.

The same is true, mutatis mutandis, for the productive system as a whole: By its nature, and its structure, it is not neutral, but to the service of the accumulation of capital and the unlimited expansion of the market. It is in contradiction with the imperatives of preserving the environment and the health of the work force. It is then necessary to “revolutionize”, by transforming it radically. This might mean, for certain branches of production - the nuclear plants for instance - to “break” them. In any event, the productive forces themselves must be deeply modified. This means first of all an energetic revolution: the replacement of non-renewable energies responsible for pollution, the poisoning of the environment and the warming of the planet - carbon, petroleum and nuclear - by “soft”, “clean” and renewable energies (water, wind, sun) as well as the drastic reduction of the consummation of energy (and thus the emission of CO2).

In short, there is a need for a change of paradigm of civilization - which concerns not only the productive system and the habits of consumption, but also the habitat, culture, values, style of life - and for a transition towards a new society. A society where the production will be democratically planned by the population; which is to say, where the major choices on the priority of production and consumption will no longer be decided by a handful of exploiters, or by the blind forces of the market, nor by an oligarchy of bureaucrats and experts, but by the workers and consumers, that is, by the population, after a democratic and contradicting debate between different propositions, in view of two essential criteria: The preservation of ecological balances and the satisfaction of basic needs.

The battle for eco-social reforms can be a carrier of a dynamic of change, but only if we refuse the arguments for the dominant interests in the name of the “rules of the market”, of the “competition” or of “modernization”. Every conquest in this battle is precious, not only because it slows down the course towards ruin, but also because it allows individuals, men and women, notably workers and local communities, and still more particularly the peasants and indigenous peoples, organize themselves, to fight and to become conscious of the relevance of the fight, to understand, through their collective experience, the failure of the capitalist system and the necessity of a change of civilization.

Mobilizations such as the one that took place in Copenhagen in December 2009 at the occasion of the international Summit on climatic change, with dozens of thousands of people united around de demand “Let’s change the system, not the climate”, are another important example. Only two governments represented in Copenhagen showed solidarity with the protesting movements: that of Evo Morales (Bolivia) and that of Chavez (Venezuela). Evo Morales had declared in 2007: “The world suffers from a fever provoked by climatic change, and the disease is the capitalist model of development. It was he who convoked in 2010, in the aftermath of the spectacular defeat of the Summit of Copenhagen, an International Conference of Peoples at Chochabamba, in defense of the Climate and Mother-Earth, whose success was an important step towards the planetary coordination of resistances.

Morales and Chavez claim to belong to 21st century socialism and of ecology. However, the economies of their countries remain essentially dependent on the production and exportation of fossil energies - gaz for Bolivia, petroleum for Venezuela - the same that are responsible for the global warming...
An important initiative to overcome this type of contradiction has recently been taken by another leftist Latin American government, he too claims to belong to the 21st century socialism: that of Rafael Correa in Equator. For many years now, the powerful indigenous movement of this country represented by the CONAIE (Confederation of the Indigenous Nations of Equator), as well as the ecological movements and the forces of the socialist left, fight to defend the natural park of Yasuni, well in the Amazonian region, against projects of various oil companies - national and multinational - to exploit the gigantic underground reserves of this protected zone which constitutes one of the richest biodiversity reserves in the world. The government of Equator had proposed to leave the petroleum under ground, in the condition of being indemnified by the wealthy countries, up to half of the value of these reserves - estimated at 7 billion Euros - payable in twelve years. However confronted with the tergiversations of European countries that had manifested their interest - Sweden, Germany, France, etc. - Rafael Correa backed up and seemed disposed to deliver the park to the representatives of the fossil oligarchy. But thanks to the combined pressure from the indigenous, the ecologists and the socialist left - supported by the public opinion in Equator favorable at 76%, according to a recent survey, to the non-exploitation of the reserves of the amazonian park - he took the right decision: the petroleum of Yasuni will remain beneath the ground.

Moral of the story: It is important to have leftist governments, but the decisive factor is social and political mobilization of those principally concerned, the “from below” pressure of social movements...