Canada's own year of extreme weather 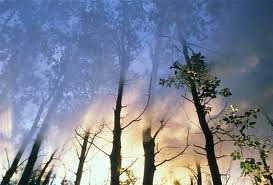 2010 was a year of wild weather all over the world. Who doesn't remember the torrential monsoon rains that devastated Pakistan, Russia's raging wildfires that wiped out grain crops and burnt forests to a crisp, and the record breaking hot spells that struck around the globe?

In short, 2010 was not a very happy weather year for many parts of the world. One place viewed as largely removed from weather calamities is Canada. Northern, cool, wet, and forested, Canada enjoys the prime location and conditions to escape pretty much scot-free from wild weather events. However, the weather of 2010 suggests that Canada may not be as safe and sound as commonly thought.

When volatile weather events strike globally, Canada is often viewed as the lucky nation too northern and cool to be scathed. In spite of this, in extreme weather-filled 2010, even Canada did not escape from the climate's erratic behavior. To ring in 2011, Environment Canada compiled a list of Canada's top ten weather stories which details some quite damaging events. Included here is the Vancouver Winter Olympics-disrupting mild temperatures of (non) winter 2009/2010; Alberta province's devastating July hailstorm during which golf ball - and up to baseball - sized hailstones shattered windows and windshields, stripped trees bare, and decimated crops; and the drought to flood conditions suffered by Canada's breadbasket, the central Prairies.

Other weather highlights included monsoon rains on the west coast, near-hurricane conditions in the east, and intense and expensive fires throughout the province of British Columbia. While Canada's 2010 weather experience hardly compares with the large-scale devastation and human life tolls experienced in other nations, it's become clear that the US's northern neighbor is hardly exempt from weather volatility.

Sequences of unusual weather raise the question of whether human-caused climate change is responsible. 2010's weather is no exception (see Guardian and Uptake articles). As Dr. Benjamin Santer of Lawrence Livermore National Laboratory discusses in his video interview with CSW, we cannot attribute specific weather events to climate change with 100% certainty. Santer notes that scientific work in "fingerprint" researching has led climate scientists to be confident about how much of observed climate change, but not weather change, they can attribute to human causes. Regardless, scientists do expect more severe weather to accompany ongoing climate change.

Improved scientific understanding of the extent to which particular extreme events, such as a flood, can be attributed to human-caused climate change would be useful in assessing and managing climate change risks. Santer talks about “fractional attributable risk”, a method intended to make possible a better characterization of how human activities “change the likelihood of specific extreme events occurring". This method compares computer climate models run with and without human influence values inputted. Then, looking at a past weather event, such as the 2003 summer heatwave, scientists can assess how much of the risk of such an event is attributable to human-caused climate change.

Santer's November 2010 testimony before the House Science and Technology Subcommittee on Energy and Environment included this:

We are now capable of making informed scientific statements regarding the influence of human activities on the likelihood of extreme events (75, 76, 77).

As noted previously, computer models can be used to perform the control experiment (no human effects on climate) that we cannot perform in the real world. Using the "unforced" climate variability from a multi-century control run, it is possible to determine how many times an extreme event of a given magnitude should have been observed in the absence of human interference. The probability of obtaining the same extreme event is then calculated in a perturbed climate -- for example, in a model experiment with historical or future increases in greenhouse gases, or under some specified change in mean climate (78). Comparisons of the frequencies of extremes in the control and perturbed experiments allows climate scientists to make probabilistic statements about how human-induced climate change may have altered the likelihood of the extreme event (53, 78, 79). This is sometimes referred to as an assessment of "fractional attributable risk" (78).

Recently, a "fractional attributable risk" study of the 2003 European summer heat wave concluded that "there is a greater than 90% chance that over half the risk of European summer temperatures exceeding a threshold of 1.6 K is attributable to human influence on climate" (78).

This study (and related work) illustrates that the "D&A" [Detection and Attribution] community has moved beyond analysis of changes in the mean state of the climate. We now apply rigorous statistical methods to the problem of estimating how human activities may alter the probability of occurrence [of] extreme events. The demonstration of human culpability in changing these risks is likely to have significant implications for the debate on policy responses to climate change.

As climate scientists learn more about fractional attributable risk, they will be able to know with greater confidence how much of the weather extremes we're seeing can be chalked up to our poor treatment of the atmosphere. Canada is a major greenhouse gas emitter. Hopefully, as Canadians begin to realize that they are not spared from extreme and harmful weather events that are attributable in part to human-caused climate change, they will give stronger support for action on curbing emissions and for preparedness in dealing with climate change impacts.
Posted by Next Year Country