After the Deepwater Horizon oil spill 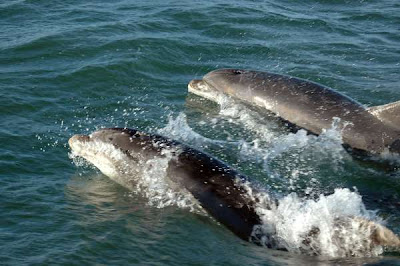 "Dolphins off the bow!"
I race to the front of the WeatherBird II, a research vessel owned by the University of South Florida. There they are, doing their sleek silvery thing, weaving between translucent waves, disappearing under the boat, reappearing in perfect formation on the other side.

After taking my fill of phone video (and very pleased not to have dropped the device into the Gulf of Mexico), I bump into Gregory Ellis, one of the junior scientists aboard.

"Did you see them?" I ask excitedly.

"You mean the charismatic megafauna?" he sneers. "I'll pass."

Ouch. Here I was thinking everyone loves dolphins, especially oceanographers. But it turns out that these particular marine scientists have issues with dolphins. And sea turtles. And pelicans. It's not that they don't like them (a few of the grad students took Flipper pictures of their own). It's just that the charismatic megafauna tend to upstage the decidedly less charismatic creatures under their microscopes. Like the bacteria and phytoplankton that live in the water column, for instance, or 500-year-old coral and the tube worms that burrow next to them, or impossibly small squid the size of a child's fingernail.