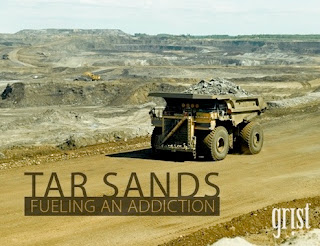 Embattled oil company BP is under fire once again for giving the green light to “Sunrise” – its first extraction project in the controversial Canadian Tar Sands [1]. The project, which is estimated to contain 3 billion barrels of oil, was put on hold several times due to financial doubts and public concern, but was given the go-ahead on Monday.

Now BP and its partner Husky Energy face opposition from local First Nations concerned about the impact of the project on their health, water supply, food and traditions. There is also significant opposition to the project in BP’s native UK, from environmentalists, climate activists, artists and shareholders [2].

Eriel Tchekwie Deranger from the Athabasca Chipewyan First Nation said: “Tar Sands extraction is devastating the lives of First Nations communities across Northern Alberta. The Alberta chiefs have unanimously called for a moratorium on all new Tar Sands projects, but BP and Husky are ignoring our wishes and trampling over our rights and communities in the quest for profit.”

James Marriott, of oil industry watchdog Platform, said: “This is BP’s first large-scale investment since the Deepwater Horizon disaster. Investors were informed last year that BP’s risk management strategies for the Sunrise project conformed to the company’s standard practices – which Deepwater Horizon has since shown to be fatally flawed. This new commitment to go ahead with the project takes place in the midst of the Cancun climate summit, showing that BP has scant regard for the climate impact of its projects and that the company has not changed tack despite the pronouncements of new CEO Bob Dudley.”

Jess Worth, of campaign group UK Tar Sands Network said: “We are furious about this. If we burn the oil in the Tar Sands we have little chance of preventing runaway climate catastrophe. BP knows this, but it doesn’t care. The same blatant disregard for public health and safety it displayed in the Gulf of Mexico is now being imposed on the entire planet, with the help of UK Government tax breaks and UK citizens’ pension funds. BP can expect a whole new backlash here in Britain.”