Car Conversion: Towards an Eco-Socialist “Economy of Reproduction”

The car industry is a good example of the current many-sided crisis, or,better, its crystallisation point: for decades the industry has been characterised by enormous over-capacity – nevertheless western car manufacturers want to double production. At the same time, new and strong competitorsare emerging, especially in India and China. However, these emerging mar-kets are the hope of western car producers, and this despite what everybody knows: if countries like India or China reach the same level of automobilisation as in Europe or the US we are facing climate collapse – that is a differentkind of overproduction, independently of whether there is a real global economic “overproduction”.

That was one of the key questions raised by Sigfri-do Ramírez, a Belgian researcher,at the seminar on “The Crisis of the Car In-dustry – What Kind of Socio-Ecological Conversion is Needed?”at the European Social Forum in Istanbul, organised by Transform! Europe in cooperation with Espaces Marx (France), Labour and Globalisation, TAKSAV, IGMetall, CGT and CGIL on July 2, 2010. Before reaching new levels of global automobilsation, megacities likeMumbai, Shanghai or even Istanbul will experience a total traffic breakdown – even if one is driving a “green car”. Now every global player wants to gogreen – but this only means continuing on the path of individual mobility with different fuel.

The electric car might offer new perspectives to car manufacturers but does not change any aspect of the structure of individual traffic, traffic collapse, soil sealing or the enormous consumption of resources that are in part highly toxic and rare, such as lithium. These strategies focus on further growth of production and export, which does not limit resource consumption. Moreover, they intensify competition and global imbalances. Thus electric cars are “just one option”, according to Uwe Fritsch, IG Metallshop steward at Volkswagen. The crisis is hitting workers hard, but Fritschhopes that it could create “more awareness of alternatives”. At VolkswagenSalzgitter, for instance, they are experimenting with the use of car motors for small block heat and power plants in cooperation with the green energy supplier Lichtblick.With an electric car strategy, Fritsch insisted,one would have to ensure the 100% use of renewable energy.

But while the new technologies generate high development and infrastructural costs, it is completely unclear which technology and which standard will finally prevail. Even when some global players in the West are not doing at all badly in terms of global competition, they have for decades been losing jobs in their home bases, as Christian Plichowski of France’s CGT pointed out. New production sites and employment will be built up in the emerging markets – not at home. Combined with globally increasing productivity and enforced work intensity there will be less employment in Europe.Gianni Rinaldini, former FIOM-CGIL secretary at Fiat, and others, stressed the impact of the crisis on competition between workers.

This means the old union strategies of competitive corporatism do not offer a perspective for the future. Even for the new manufacturing sites and suppliers in Eastern Europe or Turkey the crisis made clear, as Nermin Kaplan of the Turkish organisation TAKSAV indicated, that the dependency is extremely high. And when costs –especially labour costs – are rising, capital is already on the way to new production sites in Asia – that is where the growing market is, not in Eastern orWestern Europe. We are in desperate need of new and deeper forms of transnational workers organisation, in cooperation with ecological and civil-society groups, for defending employment and workers rights combinedwith initiatives for many alternatives.Therefore,all contributors agreed,a transformation isneeded – a socio-ecological conversion of the car industries.

I will focus on three points. 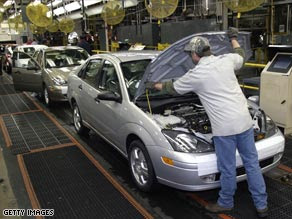 1. This is first of all a question of how we struggle,how we conceive politics, starting from different particular interests and rearticulating them such that many interests fit together. In the concrete situation of rescuing Opel – the European branch of GM –, the union was right to push for state assistance. But there is not only competition between workers in different sites – preserving old structures was not convincing to everyone.The feminist movements have no interest in saving male jobs, while female jobs in retail are not secured in the event of a collapse of Arcandor – one of the big retailers in Germany – and while reproductive areas have been drying up for years now. The ecological movement has no interest because…well I don’t have to explain why. The unemployed have no interest because saving the high-paid standard core employees doesn’t make sense to them when their benefits are cut again and again and repression forces them into precarious working-poor jobs. In the end, movements act in isolation, and there was not enough pressure for rescuing Opel. So GM will act alone, cutting jobs. How then do we rearticulate different interests and concrete struggles?

Using the same example of Opel, state capital assistance should be tied to concepts of alternative production and partial or full public ownership of the company (the US did this in a way with GM, but without using the occasion for initiating a conversion). This would have to be connected to an expanded participation of the workforce, trade unions and the region,for example in democratic regional councils which decide on the concrete steps for a conversion of a car manufacturer into a service provider for public mobility with ecological focus, oriented to integrated mobility concepts combining the different mobility systems, shifting the weight between public and private transport, as Gianni Rinaldini mentioned, giving priority to tram, buses, pedestrians, bicycles or electro-bicycles. Incidentally, bus manufacturing is one of the few really profitable areas in the automobile industry. Let’s organise around perspectives of this kind, and this may induce different civil society groups to join the struggles.

2. This conversion is impossible to achieve in individual companies, but re-quires deep structural change. It’s not enough just to build electric carsand retain the individual-mobility orientation in order to save employment. The whole structure of cities and space has to be converted, reducing the distances and separations between work and home, in bringing children to school and then driving to work, between work, supermarket and coming home late after long peroids spent in traffic jams with consequent late preparation of meals before falling asleep on the couch in front of the TV. Thus reduction of forced involuntary mobility is crucial. These new concepts of mobility could only be implemented together with the workers in the automobile industry, as Uwe Fritsch of IG Metall makes clear.

Moreover, in view of the deep ecologic crisis, embedded in the current macroeconomic orientation, conversion would therefore imply transforming our growth-orientated capitalist economy into an “economy of reproduction” that knows how to limit itself and how to create new wealth at the same time. Let us focus on a participatory, need-centred, solidaristic “care economy” in which people care for each other, with social infrastructures of public transport, but also of public health, care, education, research, social services, food (-sovereignty) and protection of our natural environments. Let’s adopt a broad view. These are central needs whose denial has been deplored for years.

And these are the only areas where we have growing employment in countries like Germany, France, the US or Sweden. But also in the emerging markets these are fast growing sectors. It is extremely important to keep them in the public domain. This reproductive economy, which means a qualitative development of needs and production, but not necessarily quantitative growth, would contribute to truly ecological modes of living and producing and to developing a practice of “buen vivir”(good living) that many are trying to explore, not only in Latin America.

Especially in the South,this means drawing on the basic needs of millions of the rural and urban poor – this means stabilising rural communities, giving them control over their conditions of life and their specific modes of production, and land reform for food sovereignty, so that they are not forced to migrate to the megacities. In the megacities it is vital to construct the basic material and social infrastructures and security systems. In terms of mobility this means free access to rapidly expanded public transport, instead of unjust and costly infrastructures for millions of private cars and high costs for environmental and human damage. The so-called growing middle classes in India, China or Brazil – the object of desire of our car manufacturers – are and will be only a small part of an increasingly polarised population. To focus on their ability to buy cars is no strategy for the left.

3. This reorientation towards reproductive needs goes together with an orientation towards domestic markets and production. Christian Pilichowski talked about the global production chain in cars for instance and the waste of resources (you can also talk about yogurt) – transport,one of the main polluters, has to be downsized and its production organised ecologically. The tendency to de-globalise and regionalise the economy also makes for a reduction of current account imbalances and export fetishism.Through a non-mercantile expansion of the public sector, markets and privatisation are can be pushed back.This means we first need a conversion of the car industry, but also a conversion of our growth and export-oriented economic models. Given the necessity to shrink certain sectors, like the car industry, strategies of a socially sustainable just transition have to be developed, because conversion and deep structural change also means that many workers will loose their old jobs.

Here we can draw on rich union experiences – good and bad – with structural change in the coal and mining sectors, in steel and maritime industries with transitional employment and requalification programmes, which of course requires financing both from the companies and the state. This also means a new debate on, and activism for, the reduction of labour time, as Nermin Kaplan of TAKSAV said. This also implies that in the meantime other sectors have to grow to provide new jobs, but relatively decoupled from material growth. Suchqualita-tive growth is necessary for the transition time also due to deficiencies in many sectors of reproduction– especially in the global south. So our struggles for a conversion have to start from the particular problem of saving jobs in the real existing car industry but in a perspective of a wider social transformation. Otherwise, even the struggle for particular jobs will soon be lost.

This, and the task of transforming structures, very soon requires elementsof participatory planning processes,consultas populares and people’s planning processes, or regional democratic councils (which are already in discussion in car manufacturing regions like the south of Germany). Fast conversion processes,which are needed now, were in the past carried out with planning (for instance in the US in the 1930s and 40s),but this time we need participatory planning.To put reproductive work, in the broader sense of the term, at the centre of a transformation project makes it possible to abandon the growth fetish – and in so doing the capitalist mode of production is questioned in the medium term. Ultimately it poses the question of who decides on the deployment of resources in society and of which activities are socially necessary .

That is the overall approach of a very large international conference organised by the Rosa Luxemburg Foundation and the parliamentary group of Die Linke in Germany, taking place in Stuttgart on October 28 – 30 of this year ,bringing together about 500 workers, union representatives, people from social movements, ecological groups etc., on an international level, to discuss paths and possibilities for conversion of the car society – not only conversion of a certain industry but transformation of the economic model, of modes of living and modes of mobility – with a strong focus on alternatives. The conference is part of the project on long-term transformation and just transition the Foundation which will continue to organise in 2011.

The English version of the programme can be found at: www.auto-mobil-krise.de/files/2010/09/Programme-Auto.Mobile.Crisis.-Web-Version.pdf
Posted by Next Year Country