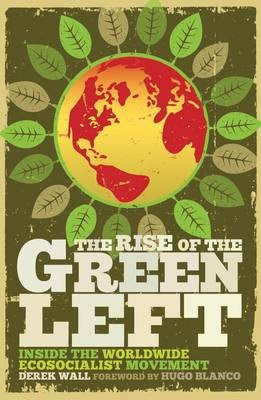 The Rise of the Green Left: Inside the Worldwide Ecosocialist Movement
By Derek Wall
Pluto Press, 190 pages, paperback
www.plutobooks.com/display.asp?K=9780745330365&amp

As the threat of climate catastrophe looms ever larger, Derek Wall has written what he calls "an explicit call to non-violent arms".

The prolific British author and activist starts by outlining the case for ecosocialism. He says questioning economic growth is viewed as an act of lunacy, yet a dedication to continual growth of production and consumption for its own sake threatens the human species.

Capitalism and its need to constantly grow have produced a litany of disasters, from greenhouse gases to acidic seas, deforestation and huge floating islands of plastic in the oceans. Corporations have hijacked climate change summits from the start and locked them “into a logic of profit seeking”.

“It's instructive that an economist [ex-World Bank boss Nicholas Stern] rather than an environmental scientist wrote the British government's most important document on climate change policy.

"In addition, many environmental NGOs are actually funded by corporate polluters and banks. For example the HSBC bank, which invests in tar sand oil production, donates to the World Wide Fund for Nature."

The result is that plenty of money has been made, but with no let up in the assault on the planet.

The European Union's emissions trading system has actually allowed firms to increase their greenhouse gas emissions because permits were given away free rather than sold, allowing firms to produce more CO2 than they had previously.

Carbon trading is used to subsidise the fossil fuel industry and expand production.

Projects such as Reduced Emissions from Deforestation and Forest Degradation (REDD) result in the commodification of indigenous land and the replacement of biodiverse rainforest with fast-growing monocultures such as eucalyptus.

The promotion of biofuels has created as much damage as fossil fuels. Biofuels need fossil fuel-based fertilisers to grow. The most popular biofuel crop, palm oil, is often grown on land obtained by cutting down rainforests. Biofuels also reduce the land available for food crops, pushing up food prices and increasing starvation.

Tens of thousands of Afro-Colombians have been evicted or killed by Colombian paramilitaries seizing their land to produce biofuels for the European market.

Because the market is seen as sacrosanct, the burden of climate change has been shifted from corporations to the individual. Although leading a green lifestyle is worthwhile, it will have only a limited effect, since most emissions are not produced by individual consumers, says Wall.

The US military uses about the same amount of oil and electricity as the rest of the world put together.

The Wall Street Journal said in March 2007 emissions trading "would make money for some very large corporations, but don't believe for a minute that this charade would do much about global warming".

However, the establishment consensus is that there is no alternative to capitalism, owing to the 20th century failures of state socialism and communism. But the viable alternative, says Wall, is ecosocialism.

For Wall, the key to successful ecosocialism lies in the concept of "the commons". An everyday example of the commons is libraries, where items are borrowed and returned as the need arises. The concept can be applied to whole economies.

"The commons overcomes many of the problems with traditional state socialism because it tends to be flexible and decentralised”, says Wall.

"It has an inbuilt ecological principle based on the concept of usufruct, that is, access to a resource is granted only if the resource is left in as good a form as it was when first found. By extending this concept of usufruct, we can provide the basis of an ecological economy. By providing access, the commons enables prosperity without growth; if we have access to the resources we need, we can reduce wasteful duplication."

Such a change must be accompanied by a transition from agribusiness to permaculture and a "Green New Deal" to create jobs in renewable energy, says Wall.

Yet bringing about that change will require intense political struggle. "So while this book deals with a range of theoretical issues, it primarily aims to inspire action."

Here lie many problems. Wall says in Western societies, Greens have abandoned their principles once in power and often ignore the working class as agents of change. He notes that, in these societies, "the political system has been better at transforming radicals than radicals have been at changing the political system".

The left in the West also suffers from damaging disunity and Wall quotes Australia's Democratic Socialist Perspective as saying: "What passes as politics in 'the left' as we have it in this country can degenerate to little more than a ridiculous I'm-more-Marxist-than-you pissing competition."

Wall acknowledges the irony that the Latin American nations driving ecocsocialist change — Venezuela, Bolivia and Ecuador — have economies based on fossil fuel extraction. But he notes these countries have been far better than their Western counterparts at changing the political system. Wall sees pockets of hope throughout South America and the world.

Brazil, despite its faults, has moved from a culture of chainsaws to green laws. Paraguay has elected a former Catholic bishop, Fernando Lugo, on a platform committed to the poor and indigenous. Uruguay is now ruled by a coalition of left parties, the Frente Amplio.

The Sandinistas have regained power in Nicaragua. Mexico's Zapatistas have inspired worldwide protests, including an occupation of London's financial district by 5000 activists.

Elsewhere, the Philippines has rejected predatory agricultural giant Monsanto. Maoists are resisting land grabs for resources in India. The Ecorise Party has united the left in Italy. Iceland has elected a progressive government and the country runs on 100% renewable energy.

And even in Australia, notorious for being the world's worst polluter per capita, there are encouraging signs. "Australia has been an important country for ecosocialist thought and action”, Wall says.

"The creation in Australia of the Green Left Weekly, one of the most important political newspapers in the country, has been very significant; both for encouraging the Socialist Alliance to take up serious ecosocialist politics and for influencing the Green Party."

But despite all the hope, Wall contends that his book will have failed if it does not inspire more action: "An ounce of action is worth a ton of theory.”

He insists activists must teach themselves ecology, for which he lists a wealth of books, films, organisations and websites. He also contends that activists must know economics. That requires a return not to Trotsky — who Wall criticises for his pro-industrial views — but to Marx and Engels.

"Much of what has been written about [Marx's] supposed anti-environmental views is simply false”, says Wall. "Marx's interest in indigenous people, in ecology and in the commons, for example, show that while he lived in the 19th century, he was a 21st century thinker."

In that vein, Wall notes that the working class and indigenous peoples are in a strong position to achieve change since they are most involved in the production and reproduction of the forces that shape the environment.

"Unless trade unionists are involved in ecosocialist politics, transformation will be impossible."

Wall's book is sketchy on details of what an ecosocialist future will look like, because, he says, movements should grow organically.

"There will never be a convincing blueprint for survival and socialism, of whatever shade, should not be constructed by a committee."
Posted by Next Year Country