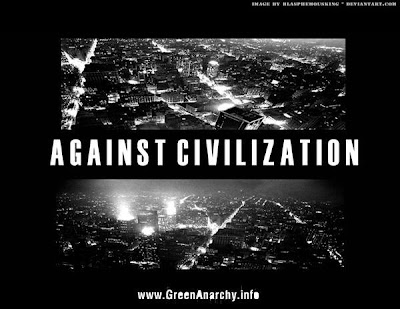 This piece was originally written by me after I had been discussing the pitfalls of so-called “primitivist” ideology with some local left-wingers. I feel it is very important to confront psuedo-leftist (or in the case of primitivism, “post-leftist”) reactionary political philosophies like the current primitivist, anarcho-primitivist and general anti-civilizationist movement. Most of the left, both Marxist and anarchist, seem to steer clear of things like primitivism and the works of its primary spokesmen, such as John Zerzan and Derrick Jensen as they find it to be absurd, and I am not without sympathy for this position, but in not confronting it we are creating a situation where many young, and energetic people, especially from the eco/green movement, who are looking for radical, if not revolutionary, solutions to current global issues are being enthralled and mislead by life-stylist philosophers preaching reactionary and psuedo-mystic doctrines.