"The road to global justice must be a green road" - ITUC 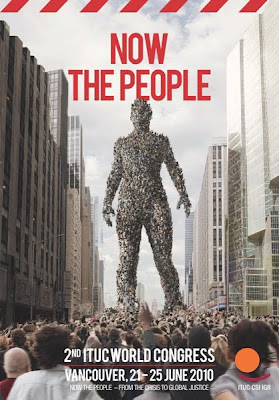 VANCOUVER, Canada - World labor leaders gathered here in the second congress of the International Trade Union Confederation are of one mind in rejecting the "Washington consensus" that calls for deregulation of banks and financial markets.

In his opening address, Guy Ryder, the outgoing ITUC general secretary, called for an end to the "dictatorship of the finance-atariate." He said it is the people's time to fight for "fundamental change in globalization."

The delegates amplified Ryders message in their remarks, and in one voice declared that decent jobs is the only real answer to the economic crisis. Overwhelmingly the delegates called for financial transaction taxes to pay for jobs and economic recovery.
AFL-CIO President Richard Trumka, speaking from the U.S. delegation, called for bold action for a "new economic order." Citing the violent government attacks and repression against the Mexican miners' union in Cananea, Trumka said the new order must include strong labor and human rights. He said collective bargaining and the right to organize are cornerstones of real democracy in a new economic order.
A highlight of the congress so far was an address by a young hotel worker from Vancouver. She spoke about workers' struggle for a new contract with some of the biggest hotel chains in the world like Hyatt and Four Seasons. She said these hotels in Vancouver are recovering from the economic crisis and the rooms are full. And still, she said, they are cutting staff, increasing workloads and demanding concessions even as they make big profits.

Many delegates raised the need to fight for the unemployed and jobs at the same time as global labor puts forward the demand for stock transaction taxes and re-regulation of the financial markets. Many also pointed out that a crisis of poverty, hunger and homelessness was rampant throughout the developing world long before the financial market meltdown and the Great Recession.
Like many of the delegates, A. Santos of Brazil argued that the crisis shows the failure of the neo-liberal model, with its deregulation, wild speculation and attacks on labor and human rights. He called for a new economic model that will put people back to work with decent jobs and income, that will provide a strong role for the state in regulating and controlling finance capital and tackle sustainable economic development to end poverty, hunger and homelessness.
J. Smit of the Netherlands echoed the call of many delegates for fundamental change in globalization. The current system doesn't work and the "invisible hand" of the market is dead, he said. Just as feudalism has failed so this system has to be discarded, Smit said. He called for a new system that provides social security, labor rights, a strong public sector, strong services, and strong banking controls. We need a sustainable green system, he said.
Several delegates joined with A. Jerad of Tunisia in calling for peace as central to a new economic model. In particular Jerad called for an end to the blockade of Gaza and for an independent Palestinian state. Others called for ending the wars in Iraq and Afghanistan. This echoed Ryder's statement that "our world is not just and not at peace." Ryder said wars "are a blight" on progress and that trade unionists must fight to end them.

Delegates also called for special attention to the impact of the crisis on women and young workers. Many spoke of the terrible conditions faced by women in the informal economy and in export zones around the world. And they called for special efforts to bring women into unions and into union leadership.


S. Andersson of Sweden spoke of the work of the ITUC's youth committee. She told how young workers are using social networks and new technology to bring young people into the labor movement. She outlined some of the special problems facing young workers including being forced into temporary work with no rights, where they are often cheated out of wages. She said the ITUC must become a loud voice for young workers.
Also much attention was given by delegates to green development and sustainability. They heartily agreed with Ryder when he said, "The road to global justice must be a green road. Green development and protecting the environment cannot be put off to after the crisis." 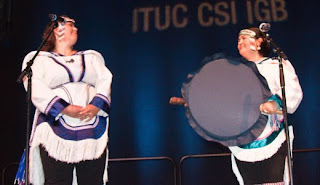 Throughout the discussion it was clear that a new fighting spirit is emerging in global labor. With all the calls for action from the congress came also a realization that labor must form bigger and stronger coalitions to take on finance capital globally. As one delegate put it, "If we are united, if we reach out to all of labor and all of the people, we can push back just as hard as the banks and the multinational corporations try to push us."
Photo: Inuit throat-singers welcome delegates to the second congress of the ITUC in Vancouver. (PW/Scott Marshall)
Posted by Next Year Country