Climate Justice has a New Program, and New Hope for Victory 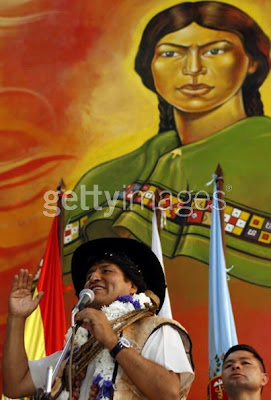 On April 22, a mass international assembly in Cochabamba, Bolivia, adopted a charter for action to protect our planet from ecological devastation.
The World People’s Conference on Climate Change and the Rights of Mother Earth drew more than 30,000 people from over 100 countries in the central Bolivian city of Cochabamba. They included a large number of Indigenous people from throughout South and North America, who played leading roles in defining the meeting’s environmental philosophy and drawing up a program for action.

Together, they drafted a People’s Agreement that places responsibility for the climate crisis on the capitalist system and on the rich countries that “have a carbon footprint five times larger than the planet can bear.”

- reduction of developed countries’ domestic emissions to 50 percent below 1990 levels by 2017;

- an Adaptation Fund to compensate developing countries for the destruction caused by climate change;

- full implementation of the UN declaration on Indigenous Peoples Rights;

- creation of an International Court of Climate and Environmental Justice with full legal authority to prosecute and punish States, companies, and people who cause contamination and climate change;

- a worldwide “people’s referendum” on the actions needed to stop climate change.

The World People’s Conference on Climate Change and the Rights of Mother Earth can mark a turning point for the global climate justice movement, in two critically important ways.

On one hand, the eight member countries of the Bolivarian Alliance of the Americas (ALBA), the nations that blocked Obama’s backroom deal in Copenhagen in December, have promised to base for their negotiating position in the next round of international climate negotiations on the Cochabamba decisions.

In Venezuelan President Hugo Chavez’s words: “In Cancun we cannot permit the imperial dictatorship to impose itself. We must go to Cancun to continue the battle of Copenhagen with greater fury … we are not going to allow the imposition of a document that does not include the voices of the people.”

At the same time, the Cochabamba meeting set the programmatic basis for global grassroots action against climate change — and, just as important, it gave thousands of young activists a new vision of a mass democratic movement that can force governments to adopt and implement concrete changes to cut emissions.

As Kimia Ghomeshi of the Canadian Youth Climate Coalition writes, “I also feel incredibly empowered because what I am seeing before me, here in Cochabamba, is a truly global resistance. A resistance to the world’s greatest polluters — polluters who refuse to accept their responsibility for causing this global catastrophe. And this movement is building, becoming more tactful, more united, more committed, with a common vision: Systems change, not climate change.”
Posted by Next Year Country