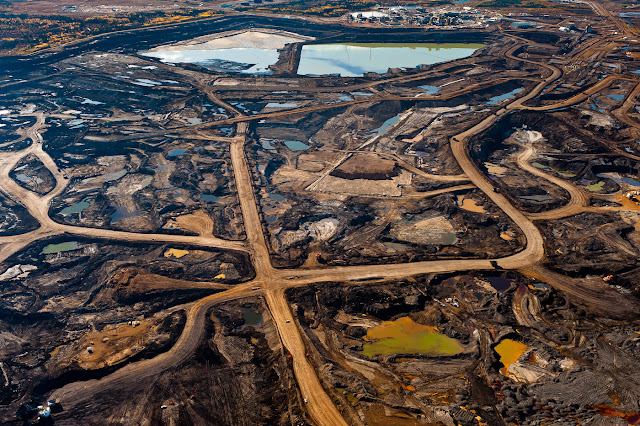 A new study finds the tar sands have yet higher CO2 emissions than expected because of the threat they post to forests and peatlands.

That is no bombshell: Climate Progress has previously pointed out that tar sands development threatens the carbon-rich boreal forests. Now it has been quantified.

A new study in the Proceedings of the National Academy of Sciences finds that existing industry plans for exploiting the tar sands will destroy over 29,500 hectares (65%) of local peatland. Peatlands are better known as bogs, moors, mires, and swamp forests. Their decaying organic matter is rich in carbon and already emerging as a major amplifying carbon-cycle feedback.

The study, “Oil sands mining and reclamation cause massiveloss of peatland and stored carbon,” finds that this destruction will release stored carbon equivalent to 42 to 173 million metric tons of carbon dioxide, “as much as 7-years worth of mining and upgrading emissions at 2010 production levels. The study notes that this “will reduce carbon sequestration potential by 5,734–7,241 metric tons C/y” and points out.

These losses have not previously been quantiﬁed, and should be included with the already high estimates of carbon emissions from oil sands mining and bitumen upgrading.

The study also slams the industry’s claim can restore the tar sands “to a sustainable landscape that is equal to or better than how we found it”:

Claims by industry that they will “return the land we use – including reclaiming tailings ponds – to a sustainable landscape that is equal to or better than how we found it” (33) and that it “will be replanted with the same trees and plants and formed into habitat for the same species” (34) are clearly greenwashing.The postmining landscape will support >65% less peatland. One consequence of this transformation is a dramatic loss of carbon storage and sequestration potential, the cost of which has not been factored into land-use decisions. To fairly evaluate the costs and beneﬁts of oil sands mining in Alberta, impacts on naturalc apital and ecosystem services must be rigorously assessed

CP has previously reported on research that makes clear there is no place for a major expansion of the tar sands if we want to avoid catastrophic global warming. This study reinforces that conclusion.
Posted by Next Year Country