The London Olympics risks being toxically tainted by its links to companies responsible for global pollution, environmentalists and human rights campaigners have warned.

Games organisers have rejected grave concerns over the involvement of Dow Chemicals and oil giant BP in the 2012 Olympics.

A toxic gas leak at the Union Carbide plant in Bhopal in 1984 led to massive contamination and the exposure of thousands of people to methyl isocyanate and other chemicals.

Some estimates put the death toll as high as 25,000 and the Bhopal factory site continues to be heavily contaminated to this day.

Union Carbide denied it was at fault, claiming that its factory equipment had been sabotaged.

Dow bought Union Carbide in 2001 and while Amnesty does not suggest they were directly culpable it argues that Dow has overall responsibility. 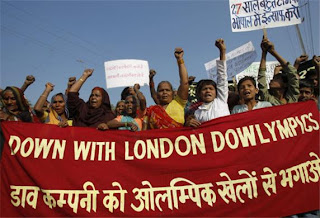 "As the 100 per cent owner of Union Carbide, Dow has the power to force its subsidiary to face justice and has responsibility for the clean-up of the Bhopal site."

"Unbelievably the IOC says Dow is committed to 'good corporate governance' - shocking when you consider all the facts and that the company denies liability for a corporate disaster on the scale of Bhopal, creating a toxic legacy for London 2012."

She said Olympic organisers had repeatedly refused to meet them to discuss their concerns.

And environmentalists including the UK Tar Sands Network, Greenpeace and Green London Assembly member Jenny Jones have written to Olympic organisers raising concerns over BP's role as a "sustainability partner" to the forthcoming Olympics.

They argue that the Deepwater Horizon disaster, BP's fossil fuel extraction activities and involvement in tar sands extraction mean it is "one of the least sustainable companies on Earth."

UK Tar Sands Network co-founder Jess Worth said: "The choice of BP as Sustainability Partner for the London 2012 Olympics sounds like a sick joke considering its record of environmental devastation around the world.

"There's clearly an urgent need for the Olympics organisers to broaden their definition of 'sustainability' and start applying it to their choice of sponsor."

Green MLA Jenny Jones told the Star: "It looks as if the Games organisers are selling their feel-good brand name to anyone with a big cheque book.

"Companies like Dow Chemicals and BP are hoping to benefit from people's positive feelings towards the Olympics, but there is a real danger that the Olympics are being tainted by association."

The IOC and London Olympic organisers Locog did not respond to requests for comment.
Posted by Next Year Country