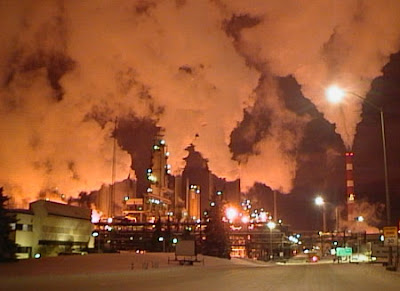 CANCÚN, Mexico, Dec 7, 2010 (Tierramérica) - The main cause of climate change is the burning of fossil fuels, so why are billions of dollars being invested to find and produce more oil, coal and natural gas?
That is the question posed by Canadian indigenous representatives at the alternative civil society meet, Klimaforum, held parallel to the United Nations-sponsored climate summit under way in the Mexican resort city of Cancún.

The activist comes from the Lake Lubicon Cree band of First Nations in the province of Alberta, where thousands of square kilometres of tar-laden soil and sands underlying pristine boreal forests and marshes are being mined.

Canada is not being censured for this flagrant disregard for the global climate at the 16th Conference of Parties (COP 16) to the UN Framework Convention on Climate Change, she said.

The nearly 200 national delegations gathered for COP 16 (Nov. 29-Dec. 10) aim to stabilise emissions of greenhouse- effect gases to prevent climate change, but there is little hope of success.

In fact, at the Cancún summit no country is being challenged for expanding operations of oil, coal or natural gas or looking for new deposits.

Burning just one-quarter of the proven reserves of oil, gas and coal will push the global climate beyond the two degrees Celsius of average warming, scientists have predicted.

"We shouldn't forget that a two-degree global mean warming would take us far beyond the natural temperature variations that life on Earth has experienced since we humans have been around," Malte Meinshausen, climate researcher at Germany's Potsdam Institute for Climate Impact Research, told Tierramérica in an interview last year.

According to Laboucan-Massimo, also an activist with Greenpeace Canada, "There is no investment in solar energy in Alberta, the region of Canada with the most sunshine." She spoke to a small group of activists and members of the public this week under a nylon awning at El Rey Polo Country Club, outside Cancún.

The gathering was part of the Klimaforum, civil society's alternative summit "to promote and debate true sustainable and socially just solutions to climate change."

Held in the middle of the coastal jungle, 20 km from the COP 16 official negotiations, there were in fact polo players mounted on horseback galloping across a huge field while Laboucan-Massimo told people about the impacts of the world's most capital-intensive project.

Not only is Alberta's tar-sands mining the world's biggest industrial project, it is the most destructive and wasteful, with carbon emissions three to five times higher than conventional oil production, said Laboucan-Massimo.

Millions of litres of fresh water are boiled, using natural gas, in order extract the tar from the soil. That water is so contaminated that it kills birds when they land in the wastewater-lakes, which cover more than 50 square km, she said.

"It's insane. It is really scary to see how much the land has changed in my lifetime, and I'm not even 30 years old," said the Canadian activist.

Most of the 2.7 million barrels of oil produced each day from the tar sands goes to the United States. That is why both Canada and the U.S. have lobbied other countries to prevent a moratorium on fossil fuel expansion from coming up at these meetings, said Clayton Muller-Thomas, of the Mathias Colomb Cree Nation in northern Canada and organiser at the Indigenous Environmental Network.

"They and other industrialised countries prefer techno-fixes like REDD (Reducing Emissions from Deforestation and Forest Degradation), biochar and carbon capture and storage rather than real reductions in emissions," Muller-Thomas told Tierramérica.

If the REDD mechanism is approved, the wealthier nations can pay to conserve forests in tropical regions as a way to offset their own greenhouse gas emissions.

The rich countries would then obtain carbon credits that would help them achieve their emissions reduction targets set out in the Kyoto Protocol.

Such strategies are "false solutions" to the problem of climate change, and threaten the rights, lands and cultures of indigenous peoples who have been asking for a moratorium, he said.

Bolivia tried to bring a proposal for a moratorium to Cancún, along with other parts of the Cochabamba "People's Agreement" that came out of a gathering in that Bolivian city last April. Known as the World Peoples Conference on Climate Change and the Rights of Mother Earth, it drew some 35,000 participants from around the globe.

At that meet, the participants agreed to call for an oil moratorium and for governments of the world to recognise the rights of Mother Earth. The key aspects of the Cochabamba platform were included in the texts for negotiating a new binding agreement, but set apart in brackets, as were so many other items about which consensus has not been reached.

However, the COP 16 chair, Mexico's Foreign Minister Patricia Espinosa, submitted a draft proposal to the negotiators in Cancún that excluded the Cochabamba issues.

In reaction to a complaint from Bolivia it was reported that the text was her personal initiative and not the official text for the negotiations, but it was enough to prompt this response from Thomas-Muller: "It's business as usual here at the COP 16."

It is also business as usual for energy giant British Petroleum (BP), which announced last week it will proceed with its first project in Canada's tar sands.

BP, the company responsible for the massive oil spill this year in the Gulf of Mexico, along with a Chinese-owned partner hopes to extract 3 billion barrels of oil through their massive Sunrise project. More than 3 billion dollars is to be invested to get the oil out within three years.

"If we burn the oil from the tar sands we have little chance of preventing runaway climate catastrophe," said Jess Worth, an activist with the UK Tar Sands Network.

"BP knows this, but it doesn't care," Worth said in a statement.