Bolivia Decries Adoption of Copenhagen Accord II Without Consensus 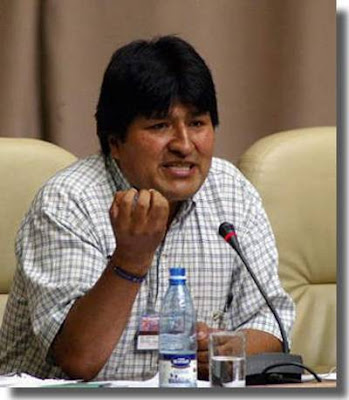 December 11, 2010 (Cancun, Mexico) – The Plurinational State of Bolivia believes that the Cancun text is a hollow and false victory that was imposed without consensus, and its cost will be measured in human lives. History will judge harshly.

There is only one way to measure the success of a climate agreement, and that is based on whether or not it will effectively reduce emissions to prevent runaway climate change. This text clearly fails, as it could allow global temperatures to increase by more than 4 degrees, a level disastrous for humanity. Recent scientific reports show that 300,000 people already die each year from climate change-related disasters. This text threatens to increase the number of deaths annually to one million. This is something we can never accept.

Last year, everyone recognized that Copenhagen was a failure both in process and substance. Yet this year, a deliberate campaign to lower expectations and desperation for any agreement has led to one that in substance is little more than Copenhagen II.

A so-called victory for multilateralism is really a victory for the rich nations who bullied and cajoled other nations into accepting a deal on their terms. The richest nations offered us nothing new in terms of emission reductions or financing, and instead sought at every stage to backtrack on existing commitments, and include every loophole possible to reduce their obligation to act.

While developing nations – those that face the worst consequences of climate change – pleaded for ambition, we were instead offered the “realism” of empty gestures. Proposals by powerful countries like the US were sacrosanct, while ours were disposable. Compromise was always at the expense of the victims, rather than the culprits of climate change. When Bolivia said we did not agree with the text in the final hours of talks, we were overruled. An accord where only the powerful win is not a negotiation, it is an imposition.

Bolivia came to Cancun with concrete proposals that we believed would bring hope for the future. These proposals were agreed by 35,000 people in an historic World People’s Conference Cochabamba in April 2010. They seek just solutions to the climate crisis and address its root causes. In the year since Copenhagen, they were integrated into the negotiating text of the parties, and yet the Cancun text systematically excludes these voices. Bolivia cannot be convinced to abandon its principles or those of the peoples we represent. We will continue to struggle alongside affected communities worldwide until climate justice is achieved.

Bolivia has participated in these negotiations in good faith and the hope that we could achieve an effective climate deal. We were prepared to compromise on many things, except the lives of our people. Sadly, that is what the world’s richest nations expect us to do. Countries may try to isolate us for our position, but we come here in representation of the peoples and social movements who want real and effective action to protect the future of humanity and Mother Earth. We feel their support as our guide. History will be the judge of what has happened in Cancun.
Posted by Next Year Country