I was going to make this week’s pick a selection from a “top ten” list from the very recently launched Netflix.ca, but the selection is so atrocious, so barren and bad, that I couldn’t bring myself to do it. So, this week’s selection, in a roundabout way, connects with other Canadian “news”: One of Canada’s leading arts, culture, politics and literature magazines, The Walrus, has recently taken to offering its advertising space to the Canadian Association of Petroleum Producers (CAPP) and the Royal Bank of Canada (RBC) for the sole purpose of greenwashing. CAPP and RBC, the principle investor in Canada’s eco-nightmare tar sands project, are publishing full-page ads in the magazine that amount to lies and rubbish.

Since the Walrus-tar sands greenwashing campaign is all about the supposed efforts of Canadian finance and resource companies’ efforts to reforest the brutally scarred region of northern Alberta, and since the awesome doc about the tar sands—H2Oil—isn’t available for streaming, we bring you Forbidden Forest.

Forbidden Forest is a tangentially related topic – deforestation and civil society resistance in New Brunswick. It’s a snappy little National Film Board doc, running at about one hour. The synopsis from the NFB site: 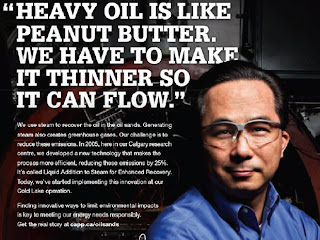 This feature-length documentary tells the story of two very different men brought together by the government of New Brunswick’s decision to hand the management of millions of acres of Crown land to six multinational corporations. One is an Acadian woodlot owner retired after nearly 40 years in a pulp mill; the other a painter and winemaker with homes in France and New Brunswick. Together, they travel to Finland – home of UPM-Kymmene, one of the largest licence holders of New Brunswick Crown lands – to urge company officials to practice responsible forestry. They also go head-to-head with the New Brunswick government in an effort to secure a new community-based forestry policy that is environmentally sustainable and produces more jobs than the highly mechanized techniques used today.

Enjoy, and after you watch, if you read The Walrus, write them a letter about their poor judgment in advertisers.
Posted by Next Year Country