Something has gone terribly wrong here.

Betty Krawczyk was 65 years old when she went to jail for Clayoquot Sound. It was her first ever time in prison.

She went to jail again at age 78 for standing in front of bulldozers in 2006 to protest the building of the Sea-to-Sky Highway through the Eagleridge Bluffs in West Vancouver for the 2010 Olympics.

"There will be no logging here today," she said.

That time a court injunction also specified that she stay away from the bluffs. She didn't stay away and back into prison she went for another 10 months, this time for disobeying the court.

Somehow, instead of receiving the Order of Canada for her courage, Betty is now up to eight prison sentences - eight! - without this environmental hero and grandmother of eight having ever harmed a single person or piece of logging or construction equipment.

She shows up, she stands up for her beliefs, she gets arrested.

Her real crime in the eyes of the courts is that she challenges the legitimacy of the judicial system to criminalize dissent, to punish protesting :
"I won’t do community service should that be part of my sentence. I have done community service all of my life and I have done it for love. I refuse to have community service imposed on me as a punishment. And I won’t pay a fine or allow anyone else to pay a fine for me. I won’t accept any part of electronic monitoring as I would consider that an enforced internalization of a guilt I don’t feel and don’t accept and I refuse to internalize this court’s opinion of me by policing myself."

Back to jail for Betty K.

After serving out her last sentence in full, Betty appealed it on the grounds that the squelching of protest inconvenient to corporations and governments is an illegitimate use of the legal system.

The Attorney General's response to her appeal has been to cite a case ruling for chronic offenders, recommend the court re-sentence her under the rules of "accumulated convictions", and lock her up for life?

"When an accused has been convicted of a serious crime in itself calling for a substantial sentence and when he suffers from some mental or personalty disorder rendering him a danger to the community but not subjecting him to confinement in a mental institution and when it is uncertain when, if ever, the accused will be cured of his affliction, in my opinion the appropriate sentence is one of life."

"A serious crime"? "A mental or personality disorder"? "A danger to the community"?"Life" ? For an appeal to a sentence she has already served?

Good God. Shame on you, Michael Brundrett of the Attorney Generals Office.
It was extraordinary enough that a provincial government now happy to take credit for having "saved" Clayoquot Sound was willing to jail for two and a half years a person prominently responsible for having forced them to do so. It is beyond heinous that they should now attempt to rebrand her fight for social justice and responsible environmental practices some sort of "mental disorder" worthy of a life sentence. 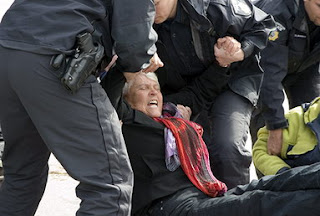 Betty's appeal will be heard this Wednesday Sept 22nd at 10am at the Court House, 800 Smithe St., Vancouver. She is asking for your support at a rally at 9:30am on the back steps of the Court House at Howe and Robson just before the hearing.

Please come. If you can't, write or email a letter to your local paper, your MLA.
Anything will do - the important thing is to let them know you are watching.

Betty is willing to go to prison for her beliefs; please take a few moments to write a letter to stand up for yours.