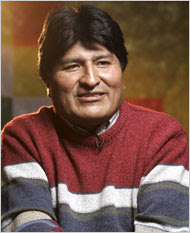 NEW YORK—The earth has its own rights, and we are responsible for protecting them, Bolivian President Evo Morales told a standing room-only crowd at the Community Church of New York in Midtown. These rights, he said, must be taken into account when we consider environmental and climate change policies.

The church was full to capacity; 600 people turned out to hear Morales. The audience reflected the city of New York in all its glory, including many young people.

The president waxed nostalgic, speaking about his childhood and how his family related to the environment. The indigenous community, of which he is a part, shared the resources. But now, he said, referring to people in his country and elsewhere who have waged fights against corporate agricultural interests, "those of us who want to protect Mother Earth are labeled terrorists."

The church's pastor, Bruce Southworth, recognized the connection between his church's mission and having Morales speak. According to the mission statement, the congregation promotes "a just world in which all persons can share equitably in the wealth of the world, and freely develop their gifts and potential."

Southworth highlighted the similarities between that mission and the Bolivian president, saying that putting faith into action means being part of the movement against neoliberal economic policies, which Morales helps to lead.

Tiokasin Ghosthorse, a member of the Lakota people, a Native American tribe whose land is in the Dakotas, is an activist for the rights of indigenous people. In his introduction, he praised Moralas for his struggle to protect the environment. He said, "We must change our thinking about the earth's resources" and that President Moralas is a voice for change, especially in his appeal to the industrialized nations.

Morales spoke in calm yet passionate tones. Those who came before him who also wanted to preserve the earth's resources are heroes, he said, but were demonized as "terrorists, communists" and killed. And now, he said, "the same powers accuse me of being a terrorist. When people organize for peace and protection of the earth's resources, we once again are accused of being terrorists. We know these lies will be spread against us, but the people continue to push back."

Morales said that in Bolivia the seasons are "mixed up." Drilling for water and getting water is becoming more and more difficult. Globally, he opined, there is a lot of money available for war and destruction but money to find solutions to the coming global crisis is hardly available.

"We must have a strong movement in the 21st century for the rights of Mother Earth," Morales said. "This is the most important thing for humankind if we are to survive."
Posted by Next Year Country