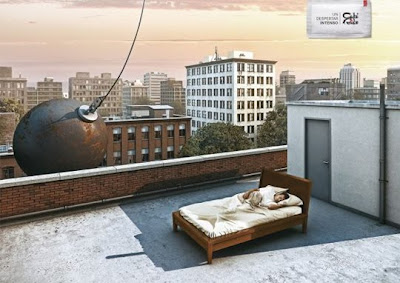 If there is a God, she’s surely bewildered by the apparent determination of the human race to ignore the deafening wake-up call she’s recently sent our way.
As wake-up calls go, it’s hard to beat the BP oil spill. The relentless gush of oil into the Gulf of Mexico for the past 85 days, captured live on camera, should be enough to finally force us to look critically at the deeply flawed concepts that have become the guiding ideologies of our times — starting with unbridled capitalism, and its elevation of economic gain above the very sustainability of the Earth we inhabit.

Another dominant creed that cries out for rethinking is blind faith in technology and the human ability to solve any problem.

For weeks now we’ve listened to TV commentators explain how enormously tricky it is to cap a tiny opening 1,500 meters below sea level in the dark — almost as hard as finding a needle in a haystack. Good point. But shouldn’t that thorny little problem have been worked out before drilling began down there?

Despite an environmental crisis of unknown and unknowable proportions, the ideology that allowed it to happen has proved resistant to change — just as it did in the face of the Wall Street meltdown, another devastating consequence of unbridled capitalism.

Among other things, the BP gusher (and the Wall Street crash) show that the corporate sector has become so powerful in recent decades that even catastrophic consequences — accompanied by public outrage — are no longer sufficient to block its profits-before-all agenda.

The 1979 nuclear accident at Three Mile Island didn’t kill anybody, but it shocked the public, and pushed the nuclear industry onto the defensive. For 25 years, the industry laid low, and governments didn’t dare approve new nuclear plants.

There’s no such humility on the part of Big Oil today; even as the worst-ever maritime environmental disaster unfolded, BP CEO Tony Hayward went yachting. Corporate lobbies now have such clout, with politicians and the media so submissive, that a calamity like the BP oil gusher happens — and nothing really changes. 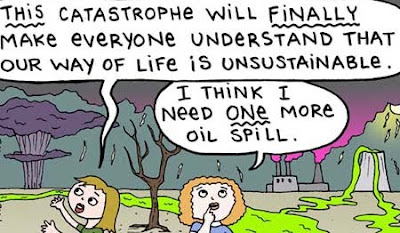 Here in Canada, while regulations for offshore drilling are being reviewed, it’s still pretty much business as usual. Last week, the Newfoundland and Labrador Offshore Petroleum Board actually invited bids for new deepwater exploration licenses.

And a Chevron-led consortium has just begun drilling off Newfoundland 2,600 meters below sea level, setting a record for deepest offshore drilling in Canada — fully 1,100 meters deeper and darker than where BP has had such trouble finding a needle in the haystack.

The BP gusher is seen by Ottawa, not as a wake-up call, but as a fresh marketing opportunity for Alberta’s oilsands, which are now preposterously being pitched as a “safe” land-based alternative.

Similarly, the nuclear power industry sees a new opening — even though no one has yet figured out how to get rid of radioactive nuclear waste, which may remain dangerous for a million years, according to the U.S. National Academy of Sciences.

Not to worry. The waste is being stored in secure containers, and if some of it were to escape . . . well, we’d figure something out.
Posted by Next Year Country