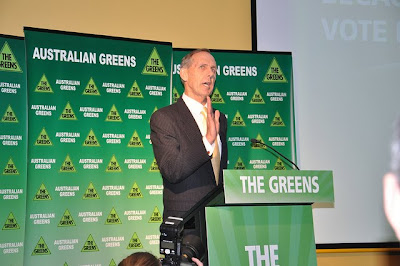 guardian.co.uk,
Wednesday 18 August 2010
Australia's Greens party is poised for a breakthrough in this weekend's elections, cashing in on the incoherence of the major parties on an issue that has claimed more than one political scalp.

The Greens could win up to 14% of the vote, according to opinion polls, nearly double what they achieved last time. It could give them the balance of power in the senate (elected by proportional representation), and a seat in the lower house.

The party is benefiting from uncertainty towards climate change on the left and denial on the right. The former prime minister Kevin Rudd lost the faith of the public after calling climate change ''the greatest moral challenge of our times" only to shelve legislation on a carbon tax. His successor, Julia Gillard, seeking her own mandate in Saturday's election, has been criticised for offering little more than a citizens' assembly on the issue.

Tony Abbott, the opposition leader, is a climate change sceptic. He assumed the Liberal party helm when his predecessor, Malcolm Turnbull, fell on his sword over the emissions trading scheme.

The leader of the Greens, Bob Brown, says his party's central message is action on climate change.

"There's enormous frustration and disappointment with both the bigger parties at their infighting and their failure to lay out a vision for Australia," he said. "If you don't [vote Green] you're voting for a do-nothing lot of big party politicians who simply don't have the gumption to take reasonable action on climate change."

The other reason for increasing interest in the Greens party is that it has positioned itself as the party of social action, calling for the legalisation of same-sex marriage (both major parties oppose this) and for more compassionate treatment of asylum seekers. The Greens' rise in popularity has come predominantly at the expense of Gillard's Labor party.

"I think what we're seeing is an element of Labor's constituency who are impatient with the very prosaic and pragmatic approach that it's taking and they're decamping to a third party," said Dr Nick Economou, a lecturer in politics at Melbourne's Monash University.

In Melbourne the Greens hope to translate such support into a first seat in the lower house. Labor's finance minister, Lindsay Tanner, is standing down as an MP, which gives the Greens a better chance of victory. The Greens' candidate for Melbourne, Adam Bandt, said the result would be close: "A lot has been forgotten, like the need to take urgent action on climate change. If seats start changing hands on the basis of values like compassion, sustainability and equality, it's really going to put those values into the national debate in a way they're currently absent."

National polls have repeatedly shown a majority of Australians want action on climate change. Rudd shelved his legislation on a carbon tax in April after it was rejected three times in the senate, even by the Greens, who said it did not go far enough. Gillard said this week there would not be a carbon tax under her leadership. Instead, she wants to invest in renewable energies and create a "citizens' assembly" of 150 ordinary Australians to forge community consensus on climate change.

Abbott said there would never be a price on carbon if he won office. Instead, he has promised a 15,000-strong "green army" of 18- to 25-year-olds who would earn £170 a week helping community and church groups with environmental projects.

If the Greens gain the balance of power in the senate on Saturday it means they can block legislation. Whichever party wins overall, it will have to negotiate with them.

According to social researcher Hugh Mackay, this is a reflection of how society has changed: "What's happened is that the world has caught up with the Greens. Suddenly their message is resonating with voters on a very large scale, whereas previously it was the eccentric fringe." The latest poll gives Gillard a four-point lead.