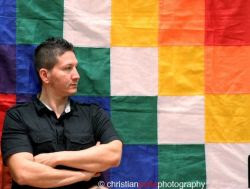 While the power elites gather in their walled-off security cordons, the Peoples Assembly for Climate Justice offers another model of decision-making. Subtitled “Moving Forward for Cochabamba” the meeting seeks to build on the successful summit in Bolivia, a people’s alternative to the failure to reach any kind of meaningful climate agreement at Copenhagen.

Facilitated by organizers who had themselves attended the Cochabamba summit, what Raul Burbano called “a life changing experience”, the summit addressed the need how climate change was also a social justice issue. Organizer Kimia Ghomeshi, said that People’s Assembly continued in the spirit of summit in Bolivia ” climate change is about justice. I think it’s great that it became very clear that the global south, indigenous communities, and poor communities are disproportionately affected and I feel people really came away with that.” Many in the meeting spoke about corporations and impunity, and that under current forms of capitalist government there could be no climate justice. And, as a participant said to the meeting “while it’s good to think about individual impacts, lifestyle activism is not the solution we need to address our governments and demand change”.

The workshop was designed to mirror the participatory, indigenous-led process at Cochabama. Kimia said that, inspired by the process at Cochabamba, the workshop was designed to be “ highly participatory , which we so rarely see in Canada… what will change things is the solutions being home-grown because then they’re relevant to the local context and people feel more ownership in creating that change rather than it being imposed on them."

Participant Maxim Winther noted that “I don’t really know what the g20s like because it’s behind 2 layers of fence and it’s costing billions of dollars and I’m not seeing any of that, all I see is police roaming the streets. “ Alaynah Smith, a new activist who traveled to Toronto from Michigan agreed, saying “it was very participatory and very open unlike the G8 /G20 where we can’t see stuff as they decide it and its really kind of almost a mystery, but this was open to the public anybody could come and we all had a voice equally”.

For more info check out the website .
Posted by Next Year Country