Leading Activists Gather to 'Shout Out for Global Justice' 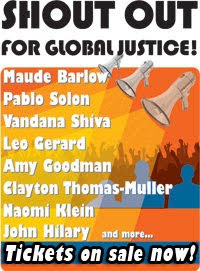 “Sadly, there has never been any threat of real progress or bold vision at these summits. The declarations have already been drafted, the media lines on failures already spun,” says Maude Barlow of the Council of Canadians. “That’s why it is so important that civil society come together now to show our leaders that not only is a better, fairer, more inclusive world possible, the people of the world stand prepared to take action if our leaders won’t.”

“The mutation of the G8 into the G20 has not created inclusive governance, but new exclusion – exclusion of smaller countries of the south and people worldwide,” says Dr. Vandana Shiva, India-based environmental activist and anti-corporate globalization leader. “We are here as part of the global movement to strengthen and defend democracy at all levels – local, national and global.”

"The peoples of Europe are facing massive job losses and cuts to public services in order to pay for the crisis caused by the failed economic policies of the past 30 years. Yet our political elites have turned their backs on ordinary working people by refusing to take the action needed to address the crisis,” says John Hilary, executive director of London-based War on Want. “Our societies are being sacrificed on the altar of free market fundamentalism, and we will fight to save them.”

"Indigenous communities of the world bear the brunt of decisions made by the G8 and G20 and while we see no inclusion of our voice in the closed-door, fenced-off and walled-in meetings, big oil and corporate giants have front and center influence. By refusing to ratify the UN declaration on the rights of indigenous people, Canada continues to suppress the rights of aboriginal people and steal a deadly subsidy for the oil sector from the indigenous communities downstream of the Alberta tar sands industrial development," says Clayton Thomas-Muller of the Indigenous Environmental Network. "Civil society resistance to the G8 and G20 agenda in Toronto and gatherings like the one this weekend at the US Social Forum in Detroit are developing the new economic paradigm that is localizing power in the interest of globalizing justice."

"The more legitimate way to make global decisions would be through the United Nations, where representatives of all countries come together, not just the self appointed global elite," says Pablo Solon, Bolivian Ambassador to the United Nations. "Recently in Cochabamba, Bolivia, we saw 30 000 activists come together to discuss solutions to climate change around the world. I feel that the more voices the better - the closer we will come to achieving the real change that our planet so desperately needs."

The Council of Canadians has convened the group of world leaders to provide the opportunity for the public to hear solutions to the real problems that confront our world today and demand water, trade, and climate justice. The Shout Out for Global Justice! will take place at Massey Hall in Toronto at 7pm, and nearly 20 communities across Canada and the United States through rabble.ca – live streaming the event for free at: http://www.rabble.ca/rabbletv.
Posted by Next Year Country