The Fire This Time: Burning Bridges

By Steve D’Arcy and Syrah Canyon 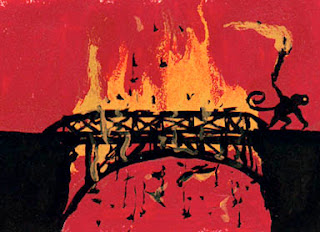 Across Canada, activists have been reacting to the May 18 arson attack on a bank in Ottawa by a group claiming to be politically motivated. The group – calling itself FFFC – set off a fire bomb inside a Royal Bank of Canada (RBC) branch in the Glebe residential neighbourhood near the city's downtown, and then posted a video of the attack on the internet.

Along with the video, the group issued a ‘communiqué’ in which they suggested that RBC was targeted because of its sponsorship of the 2010 Olympics in Vancouver earlier this year, on stolen Indigenous land, and the bank's role as the leading financier of the environmentally destructive Tar Sands megaproject in Alberta, which has led to elevated cancer and death rates in First Nation communities living downstream along the Athabasca River, while contributing massively to climate change.

Few amongst the Left could disagree, of course, with a strong condemnation of RBC, Canada's most profitable and most notoriously immoral financial institution. RBC fully deserves to be challenged, with determination and militancy, whenever possible. However, there is debate on the action taken by the FFFC against RBC. The crux of this debate turns on questions of tactics and strategy.
Read more here.
Posted by Next Year Country