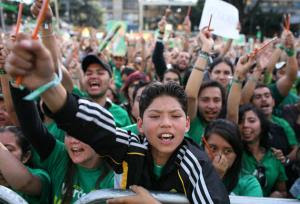 By Esmé McAvoy
The Independent
If Antanas Mockus wins the Colombian elections – and polls indicate that he will – he won't be your average president. Not only did he make his name when rector of the National University by dropping his pants and mooning a packed auditorium of rioting students, but he has recently been diagnosed with Parkinson's disease. And then there's his party. If the 58-year-old is elected, he will be the first Green head of state in the world.
Read more here.
Also read this.
Posted by Next Year Country