Toronto Star columnist (and former Principal Secretary to Prime Minister Pierre Trudeau) Thomas Axworthy is calling on Canada and other countries to make the Arctic a nuclear-weapon-free zone as a step towards the elimination of nuclear weapons.

Reporting on the work of the Interaction Council, a group of former world leaders co-chaired by former Prime Minister Jean Chrétien that supports the abolition of nuclear weapons, Axworthy writes that:

Abolishing nuclear weapons… is a precondition for the survival, sustainability and health of the planet and for future generations. The InterAction Council endorses a strategy first of minimizing the role of nuclear weapons, then eliminating them entirely. The minimization strategy was central to the recent Washington summit: Canada, for example, committed to reducing its stockpile of enriched uranium and committed $1 billion over the next 10 years to secure vulnerable sites around the world. 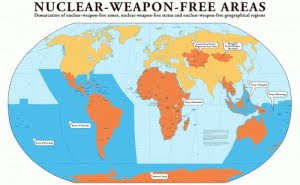 There are further steps, however, in the short and medium term that Canada can undertake to move to the elimination phase. Other states have created nuclear-weapons-free zones.

The Arctic should be the next candidate for nuclear-free status. If this militarily strategic region can be made free of nuclear weapons, then there is hope that the elimination phase can be reached.

Other recent calls to make the Arctic nuclear-weapons-free include “Ridding the Arctic of Nuclear Weapons: A Task Long Overdue,” released by the Rideau Institute and the Canadian Pugwash Group in March, and the Call for an Arctic Nuclear-Weapon-Free Zone agreed by the Conference on an Arctic Nuclear-Weapon-Free Zone, held in Copenhagen 10-11 August 2009.
Posted by Next Year Country