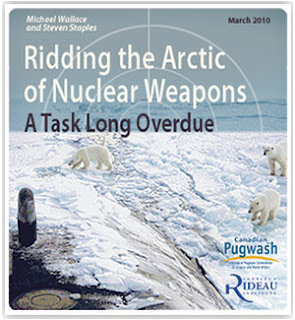 Arctic and nuclear weapon states need to work together to rid the Arctic region of nuclear weapons, finds a new report by security analysts Michael Wallace and Steven Staples.

“Ridding the Arctic of Nuclear Weapons: A Task Long Overdue” was released today by the Rideau Institute and the Canadian Pugwash Group, the national affiliate of the Nobel Peace Prize winning Pugwash Conferences on Science and World Affairs.

“Cold War-era nuclear weapon policies and practices in the Arctic, such as nuclear submarine patrols and over-flights by bombers, pose an environmental risk to the region, and an unnecessary security threat to the international community,” said Steven Staples, President of the Rideau Institute.

The report proposes greater security cooperation among the circumpolar states, including nuclear weapons states United States and Russia, with the ultimate goal of creating an Arctic Nuclear-Weapon-Free Zone. Six similar de-nuclearization agreements now cover much of the South Pacific, Latin America, Africa and parts of Asia.

“No one can deny that these treaties have been an important part of efforts to prevent the spread of nuclear weapons,” said Michael Wallace, Professor Emeritus of the University of British Columbia. “The Russian Federation might be persuaded to give up its Arctic-based nuclear forces if the United States was prepared to enter a significant, new arms strategic control treaty.”

In the meanwhile, there are steps that Canada could take right away. “The Canadian government could prohibit the transit of nuclear weapons through the Northwest Passage, and work with other Arctic non-nuclear-weapon states to create a regional agreement to be free of nuclear weapons north of the Arctic Circle,” noted Adele Buckley, environmental scientist and member of the international Pugwash Council.

The sponsor organizations will be encouraging the Canadian government when it meets with representatives of Arctic and G8 states in the coming months.

The report is available from ArcticSecurity.org
Posted by Next Year Country