Author Brian Payton on death in the Arctic, why ice is alive, our melting sense of nature, and more.
By Geoff D'Auria
TheTyee.ca 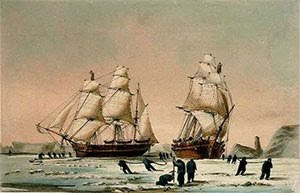 There are those who say the search for the Northwest Passage is the closest thing Canadians have to a creation myth, that in attempting to complete the line that circles the continent, we have a story that in some way tells of the birth of a national psyche, hardy but humbled in a frozen, natural crucible.

Not a bad idea. Not completely true, of course, but that's never gotten in the way of a good story, let alone a national myth.

The parts based in truth make for some compelling reading -- Pierre Berton's Arctic Grail and Ken McGoogan's Fatal Passage, for example, or even fictionalized accounts like Mordecai Richler's novel, Solomon Gursky Was Here, which uses the failed Franklin expedition as a backdrop against which a backwards and conflicted nation walks out of the white-out with a raven on its shoulder.

Stepping into the Arctic canon with a true story of high adventure is Brian Payton's The Ice Passage, just selected as a finalist for a B.C. Book Award. In Ice Passage, Payton tells the gripping tale of the McClure expedition, which set out in the 1850s to find the elusive Northwest Passage and the missing Franklin expedition, which disappeared in 1845 looking for the same passage.

Except the expedition wasn't Robert McClure's when it began. The mission was supposed to be led by Captain Richard Collinson, who was captaining the Enterprise. It seems, according to Payton's telling, that McClure's boat, the Investigator, outraced Collinson's to the western entrance of the passage and plunged in rather than wait for the other ship.

McClure's ship, and his ambition, soon got stuck in the mouth of an icy-fanged Arctic.
And so begins this little-known tale of Shackletonian proportions, a story of historic firsts and human drama. Do they find traces of Franklin? Do they follow him to the grave? Are they actually the first through the passage? Because history has virtually ignored their efforts, Payton's able to construct a story that doesn't let you go until the very last chapter.

Relying heavily on the journals of a German missionary, a translator who, it was hoped, could communicate with the Inuit, Payton found a counter-point to the blustery narrative of the 19th-century British naval men. What emerges is a multi-layered drama that is as human as it is heroic, and Payton resists the temptation to mythologize.

I met with Payton in a fogged-up coffee shop on a mythically-soggy Vancouver winter's day to talk about his love for this nerdy German missionary, the dangers of being an 'ambitious dude' in the Arctic, competing versions of expedition history, and how best to tell the story of a melting Arctic.
Here's what he had to say:

Read the rest of this article at the Tyee here.