BOLIVIA: Activists from across the globe to attend Peoples Conference on Climate Change 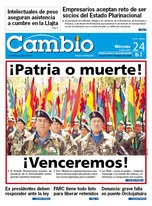 Renowned human rights activists, scientists, academics, and social organisations from various parts of the world have confirmed their participation in the Global Peoples Conference on Climate Change and the Rights of Mother Earth, which will be held in Cochabamba, April 20-22.

Among those who will be present are Naomi Klein, author of No Logo; Eduardo Galeano, author of The Open Veins of Latin America; Danny Glover, actor in films such as Lethal Weapon and 2012; Nobel Peace prize winner Adolfo Perez Esquivel; Jim Hansen, director of the Goddard Institute of Space Studies and NASA climate expert; Bill McKibben, director of 350.org; the philosophy Samir Amin, North American Jerry Mander and others.

Moveover, 8 “undeveloped” countries, as the UN refers to them, have confirmed their presence, among them Franck Armel, foreign minister of the Republic of Benin; Idi Nadhoim, vice-president and agriculture minister of the Union of the Comoros; Thant Kyaw, director of foreign relations of Myanmar; Konte Cheikh Abdel Kader, international expert on environment of Senegal; Brima Munda Sowa, general administrator of environmental issues for Sierra Leon; Abdullah Ali Fadhel Al-Saadi, Minister Plenipotentiary of Yemen; and Khampadith Khammounheuang Ang, director general of Laos, as well as a representative from Nepal.

Bolivia has invited the 192 member nations of the United Nations to participate in the summit that was convoked by president Evo Morales following the failure of the Climate Change Summit in Copenhagen.

International social movements who felt defrauded by the document signed in Copenhagen have also confirmed their presence. Representatives from countries such as Belgium, France, Mexico, Malaysia and the US will attend the summit in Cochabamba.

There will be various working groups. In the working group “Reestablish harmony with nature” will be Frei Betto, one of the maximum exponents of Liberation Theology; Bolivian Foreign Minister, David Choquehuanca; and Nobel Peace prize winner Rigoberta Menchu.
In the working group “Rights of Mother Earth” will be Leonardo Boff, one of the main promoters of the rights of the Earth; Corman Cullinan, who in his Wild Law proposes not only changing jurisprudence in the world, but also creating a jurisprudence of the Earth.

As panelists in the working group “Climate Justice Tribunal” will be present the South African bishop Desmond Tuto; the ex-president of the General Assembly of the US, Miguel d’Escoto; and writer Adolfo Perez Ezquivel.

Translated from Cambio
Posted by Next Year Country