Written by Hunter
ActUp in Saskatchewan 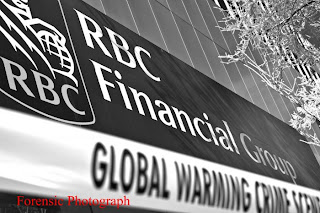 March 3 was the day the Royal Bank of Canada (RBC) held its annual meeting in Toronto. RBC is the largest financier of the environmentally devastating Alberta Tar Sands project. Since 2007 the RBC has extended over $14.3 billion (USD) in credit to companies operating in the Alberta Tar Sands.

The tar sands operation currently uses 350 billion litres of water annually, with 90% of that water being so toxic after use to process the heavy crude oil that it kills any animal that consumes it. RBC states that water quality is a top corporate priority.

In support of activists who were gathering at the RBC annual meeting in Toronto, a group of Climate Change Protection Ninjas descended upon a reported environmental crime scene in Regina. 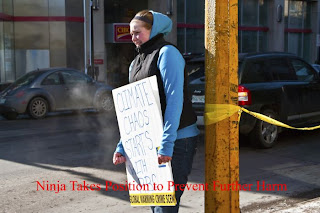