[Below is an excerpt from Atomic Accomplice. The whole book is available for purchase from the address below.]

Canada has been dealing atoms since 1942, when the Mackenize King war cabinet approved joining the US nuclear bomb effort known as the Manhattan Project. It supplied key ingredients to US production plants and weapons laboratories making the weapons that destroyed Hiroshima and Nagasaki.

The prevailing myth is that this tragedy ended Canada's involvement with the military atom. But that is false. Instead, like a radioactive plume silently spreading out concentrically from an atomic blast, Canada has accelerated the global dispersal of weapons-related elements, technologies, and secrets.

As of 2008, the world's 440 power reactors collectively met only five percent of global energy demand — the same contribution as wood.

Much of this happened below the public and political radar, and has already helped in the making of nuclear bombs currently stored in the arsenals of the US, Britain, Russia, France, Israel, India, and Pakistan. Canada has also dealt atomic supplies and secrets to military dictatorships in Argentina, Taiwan, Romania, South Korea and Communist China.

Because it is essentially immortal, this 'embedded' Canadian plutonium and U235 will imperil global security for millennia because they will outlast hundreds of future governments in the recipient countries. Or, for all intents and purposes, the rest of human history.

This is not conjecture, or hyperbole. It is a stark, fundamental fact of physics which no honest scientist can deny. The fission of uranium and the creation of plutonium are inextricably entwined like fire and smoke, or the twisted double helix of DNA. 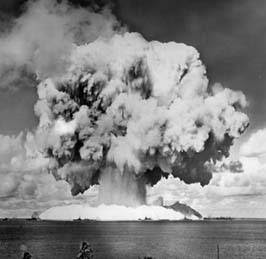 For this reason, physicists aptly named plutonium after the deathless and diabolical Greek god of the underworld. Standing outside nature itself, it embeds a dimension of destruction almost beyond imagining. A fissioned mass the size of a stick of chewing gum can destroy a city.

Canada leads the world in uranium exports. Ergo, it leads the world in collateral plutonium proliferation, and the spread of fissile U235. This earns more than $1 billion in current cash flow, but uranium's alter ego will court calamity for centuries to come because embedded in these exports is enough fissile material to make almost 5,000 warheads each year.

This trade fits the profile of a psychopath, or black marketeer. It will be a tough truth for Canadians to swallow. We pride ourselves on our standing as an "honest broker" in international relations, and for the peace-keeping forces we have sent, often at great cost in lives lost, to far-off places where civilians are at the mercy of murderous conflicts.

But "following the atoms" proves that we are a boy-scout nation with a very dirty secret. That secret has been under-written by $30 billion in taxpayer dollars, greased with secret bribes to win export deals, and buried in decades of deceit by official Ottawa.

Canada is doubly implicated in this because Saskatchewan's uranium mines are putting millions of kilograms of fissile material on the open market each year, and Alberta's infamous tar sands are spewing millions of tonnes of greenhouse gases into the Earth's open skies.

As of 2008, after a half century of heavily-subsidized development, the world's 440 power reactors collectively met a mere five percent of global energy demand — the same contribution as wood — or about sixteen percent of electricity production. Annual nuclear output was 2.6 billion kilowatt-hours.

The matching world uranium consumption was 65 million kilograms per year,6 and the matching plutonium created annually in the radioactive spent fuel from these reactors was 70 tonnes 7 - or potentially enough for 7,000 bombs per year. These statistics are from the very nuclear industry which has recently re-branded itself as the "emissions free" white knight which can smite the scourge of greenhouse gases. That claim, and those numbers, compel some simple arithmetic.

Doubling nuclear power to ten percent of world energy demand would require some 900 reactors to be in operation, which would consume 120 million kilograms of uranium annually and create enough plutonium for 14,000 warheads each year. By comparison, the existing world total of nuclear warheads is 27,000.

If it is assumed that 900 future civilian reactors would have an average life-span of three decades, enough cumulative plutonium for 420,000 warheads would be the collateral cost of meeting ten percent of global energy demand for a few decades.

These numbers belie the nuclear industry's claim that its vaunted renaissance will slay the dragon of greenhouse gases. It is technically and financially impossible for nuclear plants to replace the 86 percent of global energy now supplied by fossil fuels. Replacing only five percent would create an extra proliferation liability lasting hundreds of centuries. This is no less harrowing because it is buried in the fine print.

An energy strategy which merely substitutes plutonium tommorrow for carbon pollutants today amounts to trading fatal poisons. So, despite the daunting task, human survival depends on devising an exit strategy from both.

Paul McKay is a multiple recipient of Canada's top journalism awards for investigative reporting, business and feature writing. He is a past winner of the Atkinson Fellowship in Public Policy, and was the 2005 Pierre Berton Writer-in-Residence. A series he wrote for the Ottawa Citizen was a finalist for the Governor General's Michener prize for public service journalism. He has also written four critically acclaimed books covering public policy, business biography, and true crime subjects. His feature writing has appeared in the Globe and Mail, Toronto Star, Vancouver Sun and Maclean's Magazine.
Copies of his latest book, Atomic Accomplice, can be purchased online here.
Posted by Next Year Country