This is the conclusion to Murray Bookchin’s Re-Enchanting Humanity: A Defense of the Human Spirit Against Anti-Humanism, Misanthropy, Mysticism, and Primitivism (London: Cassell, 1995), pp. 258-260. 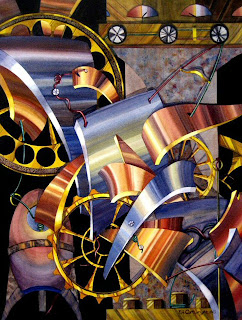 What alternatives do we have to the antihumanistic moods percolating through Euro-American culture today?

To exude nothing but optimism would be as simplistic as the pessimism I have criticized in [my book Re-Enchanting Humanity. Whether a rational choice is possible before the present market society exhausts itself in a frenzy of destruction is certainly debatable; capitalism—whose corrosive workings are abetted, not determined, by an ecer more powerful technology—is spreading into the remotest areas of the planet. Europe and North America are not alone in being shaken to their foundations by the system they spawned less than two centuries ago. Today, large parts of Asia, Africa, and Latin America have also been swept into its fold. Capital has become as “rhizomatic” as anything treasured by Gilles Deleuze and Félix Guattari, whose concepts play neatly into the imagery of global capitalism.

But whatever may be the possibilities for a rational society in reality, a serious question still arises: is the existing rationality rational? Thought too must develop its agenda, so to speak. It must always project ideas and their logic beyond what is given to us as the irrational “real.” The serious thinker must look beyond the “real” to speculate what whould be rather than validate what is. By what should be, I mean the very real but latent possibilities of an unfolding freedom and self-consciousness so treasured over centuries of thought and social action. As Marx so pithily put it: “Not only must the idea follow the real, but the real must follow the idea.” Indeed, I would argue that the idea, conceived as the rational, must guide the “real”: that is to say, it must seek the rational actualization of human potentiality and always preserve its ethical role of criticizing an irrational or “untruthful reality.”

This is the function I have assigned to [my book, Re-Enchanting Humanity]: a critique of the false existents of our time and the ideologies that reinforce them, particularly antihumanism. Thought can suggest rational alternatives to what is, and I have propounded thise that I hole to be rational under the rubric of social ecology in a dozzen books. Without pretending to be sanguine, a few guidelines for a rational future may be useful.

First, we must recover the social core that explains our present ecological crisis, a recovery that includes the need for an ecological sensibility. This core constitutes the heart of an enlightened humanism that is both critical and reconstructive, thoughtful and practical, speculative and interventionist. These views sharply break with antihumanistic myths of “the primitive,” of “immediatism,” “deep ecology,” and the tendency to reduce humanity to one species among many, equatable to the others in “intrinsic worth.” This view of humanity is fodder for the growing misanthropy, failure of nerve, indifference to human suffering, and denigration of reason and individuality in our time. For if human beings are nothing more than two-legged creatures who are subject to the same unfeeling and mindless “laws of nature” celebrated by Gaians, Malthusians, microcosmologists, sociobiologists, and the like, then another Auschwitz is more than possible.

Second, we must reinforce the powers of reason to radically project the vision of a new society that would completely replace the present one. Tragically, we already presuppose the existence of commodity production, the marketplace, and capitalism as though they were God-given, beyond the pale of history and other forms of human relationships. A new society, I have contended for decades, must be a libertarian “Commune of communes,” a confederal network of balanced, directly-democratic, and decentralized communities united administratively by councils on a regional and interregional level, constituting a counterpower against the centralized nation-state that prevails today. By “direct democracy,” I mean face-to-face assemblies of free citizens, as distinguished from folk, ethnic, or gender groups guided by their own special interests. A community that is not united by a general human interest, however riven it may be by disagreements over issues, is structured to tear itself apart over tangible privileges and particularistic concerns. Such particularistic groups with their own socioeconomic interests render citizenship impossible because they place their own concerns above the general welfare.

Third, we must advance technology and science along lines that will diminish work time (the realm of necessity) and enlarge free time (the realm of freedom). No people can be truly free if the needs of all are not satisfied and if the time needed to exercise the administration of public affairs is not available to all. That our neeed should be rational and that we must value quality over quantity as well as aestethics over gross appetites hardly requires emphasis. But people should be free to choose the life-style they want. Lacking the right to do so, they will remain with a sense of enforced privation that makes irrational choices seem desirable.

Fourth, we must totally reconceptualize our ideas of justice and freedom. No one is “equal” to everyone else in anysociety, whether it be in terms of our personal diminishing powers in the life-cycle or the different capacities, experiences, and knowledge that distinguish one person from another (such as physical strength, certain abilities, and the like). A new society will want to be guided by an ethics of complementarity, as I have called it, that tries to equalizethe differences within and between people—in short, that will be guided by an “equality of unequals”—rather than retain the pretensions of justice that regard “all people” as equal, notably as an “inequality of equals.” Unlike justice, which works from the pretensions that all are equal in theory, despite their many differences in fact, freedom makes no pretense that all are equal but tries to compensate for the inequalities that occur with age, physical infirmity, and different abilities.

It remains to be seen if the market society that prevails today will eventually so devitalize public life that an enlightened humanism will be untenable in the coming decades. Indeed, the human enterprise may end in wars, demoralization, instability, and an authoritarian society. Nor can we exclude the possibility that advances in technology and science will create new sources of non-pollutiong energy, genetically engineered foods forests, and food animals that will largely absorb the biosphere by a technologically contrived sociosphere. In which case, Gaia will be turned into a plaything of corporate giants, to be manipulated freely for the benefit of profit and capital expansion.

If this should happen at some time in the future, antihumanists will have contributed to this dismal alternative because they perpetuate a grossly alienating athmosphere of indifference to humaninty’s social plight. The logic of their premises is a misanthropic view of humanity’s most remarkable qualities: its rationality and capacity to act upon the world. It is not quatism and Asian resignation, so widely propagated by antihumanists of all kinds, that can save us from so dark a fate but activism and militancy. We live in a time when the free and rational society humanists have sought to achieve is barely a stone’s throw away. But perhaps because of that fact, it will require a great ethical effort to cross the threshold from the old to the new. The achievement of freedom must be a free act on the highest level of intellectual and moral probity, for if we cannot act vigorously to free ourselves, we will not deserve to be free.
Posted by Next Year Country