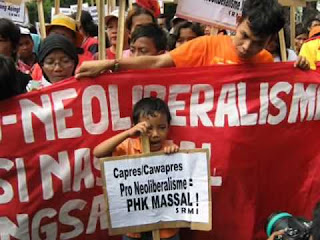 The genius of capitalism has always found means to their ends of unlimited accumulation, and has used them all, including war. Capitalism would gain by destroying, and then by rebuilding. The crisis of 1929 was solved not by economic means, but by the Second World War. That course seems now impracticable, because war is so destructive that it could exterminate human life and the better part of the biosphere. But we are not certain that, in its insanity, capitalism will not resort to this means.

This time there are insurmountable limits, that allow to say that the historic time of capitalism is ending. The first is the filled-up world, that is, capitalism has occupied all the space at the planetary level for its expansion. The other, that is truly insurmountable, are the limitations of planet Earth. Her goods and services are limited and many of them are not renewable. As Italian analyst Luigi SojaIn assures us, the past generation has consumed more energy resources than all previous generations combined. What will we do when they reach a critical point, or simply are exhausted? The scarcity of drinking water can force humanity to confront the destruction of millions of lives.

Until now, the regulations and controls that have been proposed have simply been ignored. The United Nations Commission for the International Financial and Monetary Crisis, whose coordinator was Nobel laureate for Economics Joseph Stiglitz, (known as the Stiglitz Commission), launched a great effort in January 2009 to present Keynesian type, intra-systemic reforms.

It proposed a reform of the international financial organisms (IMF, World Bank) and of the WMO (World Market Organization). It envisioned the creation of a global Council of Economic Coordination at the same level as the Security Council, the construction of a system of global reserves to counterbalance the hegemony of the dollar as the currency of reference, the institution of an international fiscal system, the abolition of tax havens and banking secrecy, and, finally, reform of the certification agencies. It was all rejected. The UN accepted only the creation of a permanent Group of Experts for the Prevention of Crises, to which no one pays any attention, because what really matters are the stock markets and financial speculation.

This disappointing realization convinces us that the logic of this hegemonic system can cause the planet to become unfriendly to us, and lead us to grave socio-ecological catastrophes, so severe that they could threaten our civilization and the human species. In Rio+20, this type of capitalism was dressed up in green, in order to put a price on all natural goods and services that are common to humanity. The fact is that it lacks the medium and long range conditions needed to guarantee its hegemony. A different way of inhabiting the planet Earth and utilizing her goods and services must arise.

The great challenge is how to handle the transition towards a post-capitalist liberal world, namely, to a social system that is oriented towards the Well Being of Humanity and of the Earth, that sustains all life and reflects a new relationship of belonging and of synergy with nature and the Earth.

Production is necessary, but in a way that respects the reach and limits of each eco-system, not merely to accumulate but to meet human needs, in a sufficient and decent form. It is also important to care for all forms of life and to seek a social equilibrium, with a view always to the future generations that have a right to a well-preserved and inhabitable Earth.

On these pages, we must set forth alternatives. We start with what is possible within the current system, because there is no way to get out of it in a short time.

We see that in the international division of labor, Latin America and Brazil are condemned to exploit what is extracted from their mines and commodities, natural goods like food, grains and meats. To confront this type of exploitation we must follow the steps suggested by several analysts, especially by the great friend of Brazil, François Houtart, in his recent book, with other collaborators: A Post-Capitalist Paradigm: the Common Good of Humanity (Un paradigma poscapitalista: el Bien Común de la Humanidad, Panamá 2012).

First, to fight within the system for ecological norms and international regulations that, to the extent possible, care for the natural goods and services imported from our countries, and restrict their use to socially responsible and ecologically correct forms. Soybeans are first for feeding the people, and only after that, the animals.

Second, to protect our autonomy, to reject the neocolonialism of the central countries that, as in yesteryear, keep us on the periphery, secondary, subordinated and lesser suppliers of the raw materials they need. We must look for ways to incorporate technologies that give added value to our products, that create technological innovations and direct the economy, first, toward the internal market and only thereafter, to the external market.

Third, to demand that importing countries pollute the environment as little as possible, and that they contribute financially to the care and ecological regeneration of the ecosystems from which they import raw materials, especially from the Amazon and remote regions.

It is about reforms and not yet of revolutions. But they will help create a basis for proposing a new paradigm that is not a prolongation of the present, perverse and decadent one.
Posted by Next Year Country