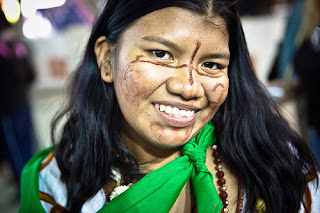 March 8th is International Women’s Day, a day on which we honour the memory of the many women workers, both rural and urban, who sacrificed their lives in the struggle for their rights, for justice, in order to end all discriminations and the social, economic and political inequalities that are among the underlying aspects of the development of global capitalism. It is also a day for celebrating the important progress that has been achieved in women’s struggles for emancipation.

March 8th is also a day of mobilisation and reaffirmation of the unlimited, on-going commitment to the struggle to end the patriarchal, capitalist system that is more oppressive to women in all spheres of society all over the world. This huge struggle continues to drive the urgent reflection of both men and women in La Via Campesina on how to progress, and change to acheive the type of society that we wish to build, with a new balance of power in social relationships where men and women have equal opportunities, rights and duties.

The Via Campesina message

We welcome the International Day of Action and Struggle that the Women of La Via Campesina are holding at global level. The objective is to denounce the advances of capitalism in agriculture via transnational companies as well as the destructive model of agribusiness that is threatening not only peoples’ food sovereignty, but also the environment. It is directly threatening women’s lives and freedom. 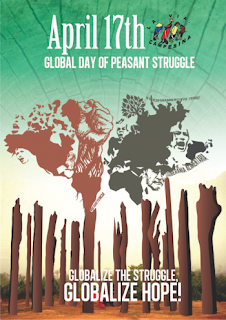 La Via Campesina clearly wishes to state that it is essential to raise the level of awareness of all men and women, by emphasizing the important role and the historical and current value of women’s contribution to small-scale family/peasant farming. They play an important part in preserving ancestral know-how and seeds, and guarantee the biodiversity and food sovereignty of peoples. It is highly regrettable that rural women, who account for 80% of food production, only own 2% of the land.

As La Via Campesina women and men struggle together to decry male chauvinist attitudes at both political and economic levels in the capitalist, patriarchal society that dominates today’s world. We shall mobilise to fight the offensive of the transnationcal companies that are grabbing our territories, our resources and our work, and shall continue to build a society based on equality and justice.

We share the challenges of integral agrarian reform, ending land-grabbing and guaranteeing social justice that will serve as a means of consolidating food and environmental sovereignty, and ending violence against women. We struggle to achieve agriculture based on agro-ecology, defending our land, water and seeds, and against the commodification of life.

Women’s struggles against agribusiness, agrochemicals and for food sovereignty, health and women’s sovereignty!

Globalise the struggle! Globalise hope!
Posted by Next Year Country