Power Play: The fight for control of the world's electricity

'Beder has written a brilliant global history of the catastrophic consequences of neo-liberal fundamentalism.'
Mike Davis 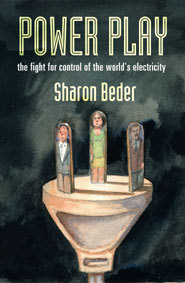 Noted author Sharon Beder argues persuasively that the track record of electricity privatisation and deregulation around the world indicates that it is a confidence trick. Her book shows how simplistic ideology and economic theory have been used to mask the pursuit of self-interest; how control of electricity has been wrested from public hands to create profit opportunities for investors and multinational corporations; and how an essential public service has been turned into a speculative commodity in the name of ‘reform’.

Power Play explores the battles between private and public ownership in the United States, the United Kingdom, and Australia since the early twentieth century, and the agenda-setting and public relations strategies involved. It investigates the way that developing countries such as Brazil and India have been forced to allow foreign investors to exercise a stranglehold over their electricity systems. And it uncovers the campaigns waged by think tanks, corporate interests, and multinational companies such as Enron to swindle the public in dozens of countries out of rightful control over an essential public service.
Posted by Next Year Country