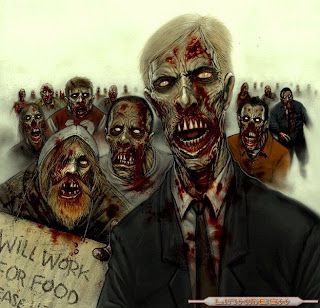 The 'oily' zombies walked to raise awareness about the many impacts from tar sands operations — from Alberta, to Ontario, and beyond. This tar sands sludge is being pumped into Sarnia-Lambton's Chemical Valley industries.  And, if the Enbridge Trailbreaker project proceeds, very dirty tar sands bitumen would be pumped through a pipeline which already crosses the Thames River, just north of London.

In Alberta, toxic tailings ponds have been leaking into the Athabasca river, each and every day. The residents of the area also are threatened by pipeline spills. In one incident this spring, millions of litres of tar sands crude and diluent spilled into the territory of the Lubicon Cree.

Being car free helps us to be free from tar sands impacts.  In the meantime, we are becoming more and more dependent on dirtier and more expensive fossil fuel sources — including Alberta’s tar sands. Relative to conventional oil, tar sands crude has far more intense climate impacts, and the extraction of tar sands drains and pollutes immense amounts of fresh water.

At the zombie walk, we used a "Turtle Island" tailings pond to catch our oily run-off, before and after the walk.

Across the street we taped up a banner that calls for a better world, where banks don't invest in tar sands operations. We had this banner up in front of a TD - Canada Trust building.