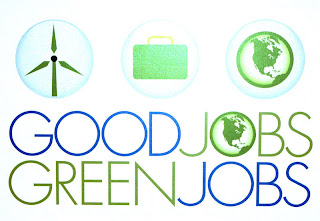 This week's Good Jobs Green Jobs conference in Washington DC is the embodiment of a continually developing and powerful coalition in action. Like most progressive efforts the group is grappling with changes in the political landscape in the wake of the 2010 elections. And like many in labor and the social movements they see grassroots focus on state and local organizing as critical to moving forward.

The presentations and discussion were energetic, determined and full of fighting spirit (see video below). This 2011 conference brought together 1600 delegates representing 795 organizations from 48 states. It included a broad array of labor, environmental, civil rights, business and social justice activists.

Dozens of lively workshops spread throughout the conference dealt with subjects ranging from public ownership and control of utilities to recycling, and from strategies for developing green manufacturing and infrastructure to retrofitting schools and public buildings for energy efficiency and good job creation. Many delegates and speaker stressed that the networking and ties being developed throughout the conference were as important as the sharing of information and experiences in the conference.
Simultaneous with the conference the Steelworkers Rapid Response activists held their national conference and lobbying effort. Hundreds of Steelworkers spread out across US Senate and House offices on jobs, energy and trade issues. In addition they had workshops and trainings ranging from fighting right-to-work-for-less initiatives to effective lobbying techniques. The Steelworkers are one of the main driving forces in the Good Jobs Green Jobs efforts.