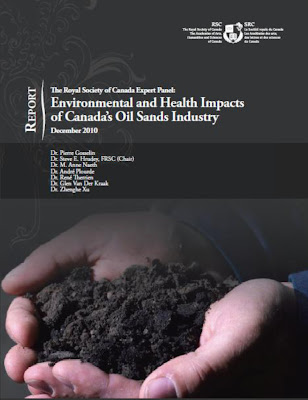 OTTAWA — An extensive review of Canada’s oil sands released on Wednesday rejected several claims from both the energy industry and environmentalists while accusing Canadian governments of inadequate oversight of the projects.

The deposits in northern Alberta of tarlike bitumen mixed with sand and other minerals have helped Canada become the largest supplier of imported oil to the United States.

But the projects also use significant amounts of energy and water to dig up deposits and then transform the bitumen into synthetic crude oil while leaving behind large, toxic waste ponds. That has made the projects a target for environmentalists around the world.

While the 438-page report published by the Royal Society of Canada found much to criticize in the oil sands, it also dismissed a common claim by environmentalists that the operations were the most environmentally destructive projects on earth.

“Based on our review of the publicly accessible evidence, a claim of such global magnitude is not accurate,” a panel of seven academics from a variety of fields wrote. “This depiction is clearly aided by the photographs of ugly surface-mined landscapes, but the claims of global supremacy for oil sands environmental impacts do not accord with any credible quantitative evidence of environmental damage.”

Susan Casey-Lefkowitz, the director of the international program at the Natural Resources Defense Council in Washington, said she was pleased by much of the panel’s findings related to the oil industry and governments. But she rejected its assessment of claims by environmentalists.

“I would still say that the tar sands industry is a terribly destructive industry,” Ms. Casey-Lefkowitz said, using the term many environmentalists prefer for the deposits.

The oil sands are a growing source of greenhouse gas emissions. Energy companies hope that unproven technologies for capturing and storing carbon emissions will solve that problem. But the Royal Society’s paper concludes that those technologies are unlikely to be suitable for oil sands operations.

Similarly the panelists were concerned that the expansion of toxic waste ponds was outstripping the industry’s ability to eventually reclaim the land. The report warns that oil sands operators may declare bankruptcy when their projects end, leaving the cost of cleanup to the province of Alberta.

The report also indicates that environmental regulators in Alberta do not have adequate resources to monitor the projects and says the federal government has effectively abandoned its oversight.

David Collyer, the president of the Canadian Association of Petroleum Producers, said the report gave the industry and governments “a more objective and fact-based way of moving the discussion forward.” He added, however, that the industry did not want either the government of Canada or Alberta to establish any formal mechanism for imposing regulatory changes based on the study’s findings.
Posted by Next Year Country