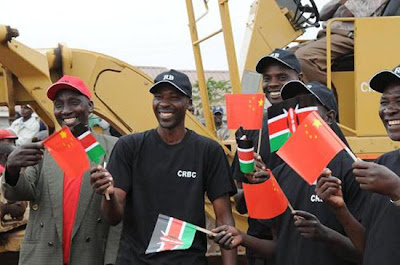 Is China smartening up its environmental and social act in Africa? It certainly wants to be seen as doing just that. One telling example was the recent Chinese government-sponsored ‘top Chinese enterprises in Africa’ competition, won by China Road and Bridge Corporation [CRBC].

The aim of the award was officially stated as being ‘to commend the contributions by Chinese enterprises in Africa’ and ‘reply to Western criticisms of Chinese enterprises with facts.’ The competition, which was jointly sponsored by the Chinese-African People’s Friendship Association, China Radio International and Africa magazine, kicked off on 22 October with the launch of a website for online voting. According to the website, the winning enterprises should ‘devote significant resources for African countries’ local economy and social development, fulfil corporate social responsibility and make a positive return to the local people of Africa.’

This trend is not new. In July 2009, in what the Swiss-based international NGO International Rivers called ‘the most significant step yet’ China’s ministries of commerce and environmental protection published draft ‘Guidelines on the Environmental Behavior of Chinese Foreign Investors’. The guidelines emphasise the social and environmental responsibility of Chinese companies and banks abroad, and foresee the creation of appeal mechanisms for ‘local controversial projects.’

But how far does this indicate a likely real shift in the behaviour of Chinese companies on the ground, and how far is it simply a Chinese version of the ‘greenwash’ for which Western companies and governments have themselves long been notorious?

The 15 October incident at a Zambian coal mine, where Chinese supervisors shot and wounded 11 workers in a labour conflict brought back memories of the blast at Zambia’s Chambishi copper mines which killed 49 workers in 2005, followed by the killing of five workers by security guards at the same location a year later.

Of course Chinese companies are often used as a whipping boy for the failure of African governments to apply their own regulations. A report by the South African Institute for International Affairs (SAIIA) in July, three months before the shooting incident, stressed the failure of regulation by the Zambian government, especially its reliance on self-reporting and the influence of close relations between foreign investors and local leaders

There have been signs that African governments have been taking such criticisms on board. In October alone there were reports that Nigeria had closed the Abuja branch of China Civil Engineering Construction Company (CCECC) over its poor health and safety record (as well as another non-Chinese company) and that Mozambique had withdrawn the labour permits of three Chinese found guilty of assaults on workers and other violations of labour and company law in the construction industry.

One common response to the record of some Chinese companies in these areas is to point out that conditions within China are often no better, especially in the mining sector. But here too things seem to be changing. China Daily has reported that – in a pilot programme – underground mine-accident shelters, escape capsules and other emergency facilities are being installed in seven coal mines in Shanxi province. Citing China Youth Daily, the report said a Lu’an Group mine in Changzhi city was the first to install the facilities. The report follows the 16 October deaths of 37 miners trapped by a gas leak at a Pingyu Coal & Electric Company mine in Henan.

International Rivers has pulled no punches in its criticism of Chinese companies and the Chinese government over such issues as the coal mine shootings. Director Peter Bosshard described conditions at the Collum mine as ‘scandalous’ and pointed out that in China’s overseas investment, unlike conditions within China, ‘muzzling public opinion is not usually possible’.

‘If the Chinese government is serious about cleaning up the safety, labor and environmental record of its overseas investors, recommendations and appeals will no longer do the trick’ he concluded. Pointing out that the Chinese government still owns the major companies, he concluded that it should ‘quickly adopt the environmental guidelines for foreign investors, which have lingered in draft stage for too long. It should closely supervise Chinese companies which invest abroad, and crack down on investors which violate Chinese guidelines and local law’.

You might think with this record that International Rivers was the sort of ‘Western NGO’ that China loves to hate. But as Peter Bosshard told , a recent workshop on environmental aspects of China’s engagement in low-income countries the Chinese government wants Chinese firms overseas to be responsible actors and is interested in learning from Western experts on the use of environmental guidelines.

International Rivers has been invited to advise Eximbank and Sinohydro on their environmental policies, and Sinohydro has adopted the recommended guidelines for complaints policy. The Gabonese environmental NGO Brainforest scored a victory when in response to its concerns, Eximbank suspended its support for a massive iron ore development project complete with hydropower dam, railway line and port, which would have violated environmental guidelines and devastated a national park.

On the other hand Sinohydro is going ahead with the much-criticised Gibe 3 dam in Ethiopia which, critics say, violates local laws, and the world’s biggest bank Industrial and Commercial Bank of China, is underwriting a US$500m loan to Chinese companies to buy equipment for the project.

The pessimists would see this as evidence for the ‘greenwash’ theory. But it might be more realistic, and more constructive, to see it as an aspect of a global contestation between elements in government and civil society which see the need to enforce environmental standards, and profit-driven firms, whatever their ownership, who will cut corners when allowed to.

As Peter Bosshard pointed out to the IDS workshop, at least the Chinese government supports moves by Chinese environmental NGOs to encourage Chinese firms to apply Chinese laws and standards in their overseas operations: ‘You would not get far in Switzerland trying to get Swiss firms to apply Swiss law overseas, or in the US either’.
Posted by Next Year Country