Another Fossil of the Day award for Baird in Cancun

'It must be wonderful to live in the magical world of Canada’s Environment Minister.' 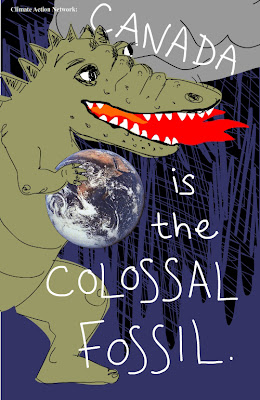 Ottawa (9 Dec. 10) - Environment Minister John Baird has won another Fossil of the Day award for Canada – its fifth so far – at the United Nations (UN) climate change summit in Cancun, Mexico.
Baird, who arrived at the talks this week, was given the latest award for existing in a fantasy world when it comes to real plans to fight climate change.

The Fossil of the Day award is bestowed each day during the summit by representatives of more than 400 international organizations. It goes to the country that has done the most to disrupt or undermine the talks.

“It must be wonderful to live in the magical world of Canada’s Environment Minister. In that enchanted land, a press release is the same as a law and ‘polluting for up to 45 more years’ means the same thing as ‘banning dirty coal'," the citation says.

"Tragically, the rest of us are stuck with reality. And in reality, it’s a problem to tell your Parliament and your media that you’ve published regulations to ban coal when you’ve done nothing of the kind. For that little vacation from the truth, Canada takes home yet another Fossil of the Day.”

More than 200 countries are represented at the talks.

Baird's standard line on climate change is that there's no point agreeing to any new international protocol that would force industrial polluters to shut down in Canada only to have them open their doors in some other country.

Prime Minister Stephen Harper has been long opposed to the Kyoto protocol of 1997 for its failure to include big polluting countries such as China. Canada is the only country to ratify Kyoto and then publicly renounce the 2012 emission targets it contains.
Posted by Next Year Country