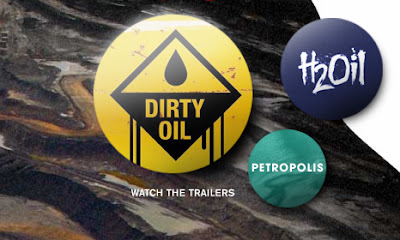 "We have ENGOs that are coming in and making decisions on our behalf," said hereditary chief Toghestiy from the Wet'suwet'en First Nation during the opening panel of the fourth annual Everyone's Downstream (EDS) conference in Edmonton, Alberta.

"Where do these decision-making powers come from?" he asked, echoing similar questions from conference participants at yesterday's inaugural event.

This evening, at 5pm PST / 8pm EST, a 'Following the Money Upstream' panel will be broadcast live online, focusing on foundation funding, ENGOs, secret deals, and proposed alternatives. Links to video recordings of all EDS events are also posted on the home page of the conference website and can be viewed at any time afterwards.

Dru Oja Jay and Macdonald Stainsby, co-authors of Offsetting Resistance: The effects of foundation funding from the Great Bear Rainforest to the Athabasca River, will present their substantial research on the secret agreements made behind closed doors by foundations and ENGOs.

"There's no transparency whatsoever," said Jay, who recently published an article about the likelihood of an impending deal between foundation-funded ENGOs and corporate tar sands industry members to greenwash the largest industrial project on the planet.

The majority of funding for campaigns and actions opposing the tar sands is channeled through a 'Tar Sands Coalition', says Jay, which is led by former Corporate Ethics campaigner Michael Marx.

The CEO of the Tides Foundation has publicly stated that Tides seeks to "bridge these two polarized camps," referring to the tar sands industry and environmental groups. For the Indigenous communities at the 'Ground Zero' of tar sands impacts, as well as those all along the proposed pipelines crisscrossing the continent, reconciliation with a giga-project they seek to shut down is impossible.

"We have to stop the agreement," emphasized Jay, adding that "whoever signs that agreement then has a vested interest" in terms of their role in the tar sands resistance.

Also on the 'Following the Money Upstream' panel this evening is Sheila Muxlow, who works with the Prairie Chapter of the Sierra Club, one of a number of ENGOs that have been involved in the controversial meetings and agreements.

First Nations Policy Analyst Russell Diabo is the final panelist, bringing his analysis of the Canadian Boreal Forest Agreement and other funding and process issues to the table.

"Our challenges are mammoth challenges in comparison to ENGOs or activists because our challenges are real," said outspoken former Chief of the Mikisew Cree First Nation, George Poitras, from Fort Chipewyan, which is located directly downstream from the tar sands.

Many more issues are likely to come up during the presentations and discussion this evening, as well as proposals for alternative and accountable grassroots structures for collaboration, funding, decision-making, and solidarity work, such as the proposal for the creation of a Climate Justice Co-op.

For those tuning in to the live broadcast and those watching the videos after the fact, comments are welcomed either via chat or message.

Sandra Cuffe is reporting from the 4th annual Everyone's Downstream conference for the Vancouver Media Co-op.
Posted by Next Year Country