Loss of ecosystems perceived by banks and insurance companies to be a greater economic risk than terrorism, finds UN report. 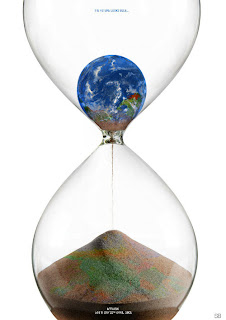 The financial risks posed by the loss of species and ecosystems have risen sharply and are becoming a greater concern for businesses than international terrorism, according to a United Nations report released today.

From over-depletion of fish stocks and soil degradation caused by agricultural chemicals to water shortages and mining pollution, the paper – commissioned by the UN Environment Programme and partners – said the likelihood has climbed sharply that declines in biodiversity would have a "severe" $10bn (£6bn) to $50bn impact on business.

With the European Union and other regions increasingly holding companies liable for impacts on ecosystem services, it suggests banks, investors and insurance companies are starting to calculate the losses that could arise from diminishing supplies, tightened conservation controls and the reputational damage caused by involvement in an unsound project.

Achim Steiner, UN under-secretary general and Unep executive director, said: "The kinds of emerging concerns and rising perception of risks underlines a fundamental sea change in the way some financial institutions, alongside natural resource-dependent companies, are now starting to glimpse and to factor in the economic importance of biodiversity and ecosystems".

The briefing paper cites the 55% crash of BP's share price and the decline of its credit rating in the wake of the Gulf of Mexico oil spill as an extreme example of the potential impact of inadequate environmental controls.

Richard Burrett, who co-chairs the Unep Finance Initiative and authored the report, said such cases highlighted the need for a new form of risk assessment that takes the value of ecological services into account. Water systems and forests are currently considered "externalities" that do not show up on corporate books. In the past year, he said, biodiversity loss is increasingly seen as a business concern and that a World Economic Forum survey in 2010, found it was perceived as a greater economic risk than international terrorism.

But he insisted this should be just the start. "The way we assess the performance of companies is flawed. It does not account for all externalities," said Burrett in releasing the briefing paper, which is aimed at executives and fund managers. "We believe we must bring these externalities into mainstream accounting."

For the report, the UN commissioned a study of 3,000 of the world's biggest corporations, which found them responsible for $2.15 trillion in environmental costs in 2008, equivalent to 7% of their combined revenues and about a third of their profits. Based on this figure, the report estimates that institutional investors with a $100m holding in a typical diversified equity fund could "own" $5.6m in external costs.

However, the authors note that awareness of biodiversity risks is still at an early stage, partly because they remain difficult to quantify. Concerns are clearly very different from nation to nation. This year, PwC conducted a separate study that found strong awareness of biodiversity risks among South American executives, but worldwide it said only two of the world's largest 100 companies saw loss of species and ecosystems as a strategic business risk.

Efforts to change values are gathering pace. This year, Unep released the results of a two-year study: The Economics of Ecosystems and Biodiversity, which estimated the global impact of biodiversity at between $2-4.5tn annually, up to 7.5% of global GDP.

Other major global financial institutions are also urging a recalculation of natural capital. The head of the World Bank, Robert Zoellick, said today that finance ministers and businesses need to factor in the value that nature provides for food, medicines, tourism and industry.

"Productivity of the land and seas is diminishing, and with them the ecosystem services that are crucial for people to get out of poverty," he said. "Endangered species are fading away for ever before our very eyes."
Posted by Next Year Country