The Fight of Our Lives 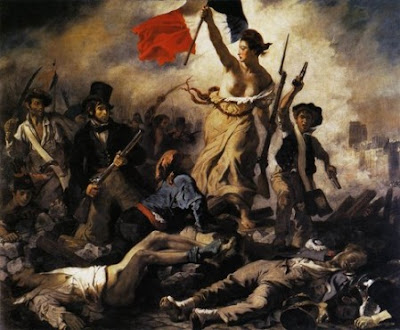 In the world of progressive, grass roots politics, everyone, it seems, is running as fast as they can. That is certainly the impression I have had over the past few years, when almost everyone I know is involved in several social movement activities or individual actions.

But it may actually be the case that some aren’t running at all any more — they are, as a colleague responding to one of my recent blogs suggested, immobilized: “…inundated and overwhelmed by the number of issues that arise on a daily basis. Add to this the sheer complexity of the many issues, the need to understand that complexity and its context in the larger scheme of things, confounded by the shifting and introduction, on an almost daily basis, of new or related issues, and you have all of the ingredients that can promote a kind of social paralysis…”

How do progressives decide on which issues to fight? The question reminds me of my conversations with Myles Horton, founder of the Highlander Folk School in Tennessee and one of the most brilliant and effective leadership-trainers of the past century. He died in 1990, but I remember him describing how Highlander chose community groups to work with. The issue the group was grappling with had to be of a fundamental nature — one in which engaging in the struggle exposed the root causes of inequality and oppression in the U.S. — such as the exercise and abuse of corporate power, or racist government legislation or imperialist adventures like the Vietnam War.

Why this rule? Small reforms that power could accommodate did nothing to challenge the system — or radicalize the activists.

Individuals and organizations in Canada who recognize that the most critical short term political goal we have is to rid the country of Stephen Harper’s government might want to engage in a kind of political and strategic triage: what are the three or four key issues that we need to focus on to expose Harper’s agenda and to exploit his weaknesses?

Our resources are limited, while the issues that deserve attention on their own merit are endless. So we need to be hard-nosed about the ones we put energy into and those we let pass. Concentrating our efforts on these key issues focuses maximum resources, energy and media attention on the political battles which can alter the political landscape in favour equality, environmental stewardship and democracy.

Tar sands: the fight we have to win 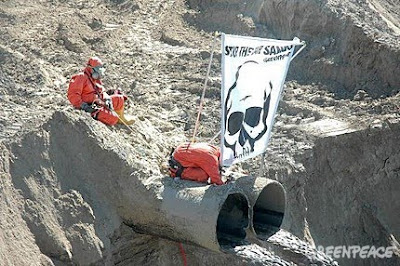 One of those issues is the continuing expansion of the tar sands and the pipelines to deliver the stuff to the U.S. and the west coast. If you were going to drop everything to fight a critical struggle, this would be one prime example. It is, in its physical manifestation alone, an obscenity — a grievous insult to the environment and a symbol of the madness of consumer society’s addiction. Oil is like crack cocaine, you know it’s killing you but you can’t live without it.

The tar sands and pipelines are an environmental disaster regarding the land itself; they consume staggering amounts of water at levels (up to 12 barrels for every barrel of bitumen) and at the same time cause pollution of the water they don’t actually turn into steam. They use huge amounts of relatively clean natural gas (almost equivalent to the energy it releases from the tar and using up 20 per cent of total Canadian gas production). The industry is a health threat to anyone unfortunate enough to live downwind of it. Emissions and cancer rates amongst aboriginal people are far above normal. (Canada no longer monitors acid rain so we have no idea what that impact is.)

The oil industry, as it does in other countries blessed/cursed with carbon riches, has completely distorted both the economy and the politics of the country. Tyee writer-in-residence Andrew Nikiforuk argues that dirty tar sands oil “…is turning Canada into a corrupt petro-state.”

Since the first few years of this decade, Canada has been going backwards in terms of the technological content of what it produces — adding less and less value and producing fewer manufactured goods (and the good jobs that come with them) because of the oil-driven high dollar. Nikiforuk — his Tar Sands: Dirty Oil and the Future of a Continent should be required reading — refers to a 2009 study by Luxembourg’s Centre for Research in Economic Analysis which stated that “…Canada’s oil-priced currency has indeed hammered industries as varied as textile mills, electronics, fabricated metal, and paper. It concluded that 54 per cent of the nation’s manufacturing employment losses (nearly five per cent of the workforce) were due to the rapid tar sands development from 2002 to 2007.”

It’s not just the old industrial economy that has been affected — the enormous social and economic potential of the green energy, post-carbon economy is not just being ignored by the Harper government and Alberta, it is being deliberately suppressed to ensure oil’s dominance. This is corruption, plain and simple. The Alberta government — if a regime in power for 38 years can even be called such — has been corrupted by the industry and continuously misleads its own public and federal agencies about the tar sands impact on wildlife, on the health of Albertans and its emission levels.

What do we get for these political, environmental and economic sacrifices? We have saved virtually nothing from all this oil wealth, and our royalty rates are so low as to be criminally negligent from a fiscal point of view. Even the Organization for Economic Cooperation and Development, that bastion of free market ideology, is shocked at Canada’s behaviour. It concluded in a 2008 report that “other nations have shown much more restraint and foresight in managing their resource revenues to mitigate boom-and-bust cycles.”

The battle is on 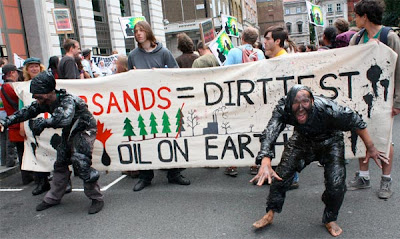 There is a pitched battle going against the tar sands and against the pipelines that will take the bitumen to the U.S. and the west coast. The Northern Gateway Pipeline Project (NGPP) is almost as reckless a proposal as the tar sands themselves and large coalition of some 150 businesses, First Nations and environmental groups is fighting it.

If it goes ahead, not only would it cross the territory of 50 First Nations and intersect with over 700 rivers and streams, its ultimate impact would be to have huge oil tankers plying the waters of the west coast from Kitimat, B.C. south to the U.S. and west to Asia. The $5 billion pipeline is the project of Calgary-based Enbridge Inc., a company with a long record of destructive accidents.

Just in the past month, two of its pipelines have ruptured in the U.S. — adding to the 278 spills recorded over the past five years.

While this fight may seem like a regional one involving just Alberta and B.C., it is in fact one of the most important political battles facing the country. Focusing attention on it is critical: it challenges corporate power directly; it is the single most important issue in the fight to have Canada reduce its carbon footprint; support for the industry is at the core of Harper’s economic policy; and it allows the movement to present a positive, green alternative to the most irresponsible energy project on the planet.

Lastly, it exposes the role of NAFTA in making Canada little more than a gas station for the U.S.

A victory here would have enormous consequences: it could be the taking off point for a fight to re-regulate corporations, remove their access to the Charter of Rights and Freedoms, call for a change to how they are chartered (they now live forever), and expose the political corruption that abusive corporate power always entails. It would also be international: a strong coalition of U.S. groups is also fighting the U.S. pipeline proposal as well as the dirty oil itself.

The coalition of groups may well be successful, and the U.S. might still rule against importing vast quantities of dirty oil from Alberta. But conventional democratic methods will not easily prevail. We have come a long way down the road of democratic decline. 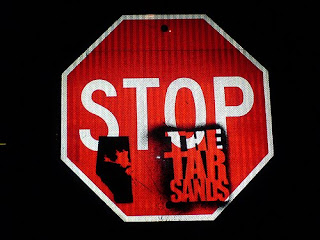 We must, on this issue in particular, begin to imagine and plan for direct action politics, including sustained and determined civil disobedience, a strategy fully justified by the assault on the country that this corrupt industry has unleashed. This struggle could be the seminal fight of the decade, shaping the on-going struggle for democracy and the environment and opening the door to the building of a post-carbon, de-growth future.
Posted by Next Year Country