“Stop Climate Crimes: leave the oil under the soil” 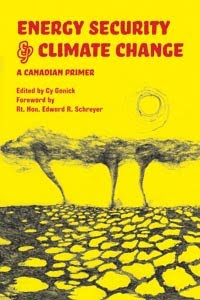 On 16 September 2009 some 25 Greenpeace activists from Canada, the USA and France shut down Shell’s 125,000 barrel per day Albion oil mining project an hour north of Fort McMurray in the Athabasca tar sands. While Greenpeace displayed a banner accusing Shell of climate crimes the petroleum transnational claimed that it was in the forefront of environmental stewardship and energy efficiency. For support Shell cited a 2007 study by Alberta’s Pembina Institute.

The deep background to this confrontation at the world’s largest industrial project is richly excavated in Cy Gonick’s collection, Energy Security and Climate Change: A Canadian Primer. Not only are NAFTA-dictated oil and gas exports depleting Canadians’ scarce reserves but the tar sands also account for half of the country’s Kyoto emissions gap and make serious emissions cuts impossible. The tar sands negatively impact water, forests, wildlife, the ways of life of indigenous peoples and the viability of small farmers. And through pipelines, natural gas extraction, refining, combustion emissions and land-fill, the tar sands affect everyone else.

Petr Cizek’s chapter exposes the co-optation of NGOs such as the Pembina Institute that are addicted to corporate money. Pembina’s economist Anielski falsely represented Canada’s boreal forests as significant carbon sinks whereas in fact they were net carbon emitters, “largely due to increases in forest fires and pest outbreaks, all related to global warming”. Cizek suggests that Anielski’s “deceptive conclusion that the boreal forest is now absorbing carbon and not actually producing it” fits nicely with his claim that the carbon  absorbed each year was worth $1.85 billion, “which could presumably be used to “offset” carbon emissions from the tar sands”.

Cizek adds that the Pembina Institute “just happens to make money selling “carbon offsets”. An employee of the Canadian Parks and Wilderness Society, an environmental NGO, reported that the Canadian Boreal Initiative (funded by the Suncor-Sunoco Pew Charitable Trusts’ series of shell operations including Ducks Unlimited in Nashville and its Winnipeg branch-plant) is “reviewing and vetting their draft press  releases”.